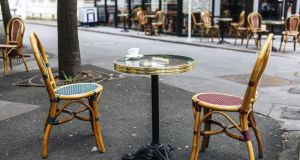 French restaurants, cinemas and theatres are trying to figure out how to survive a new curfew aimed at stemming the flow of record new virus infections.

France registered more than 30,000 virus cases on Thursday, its highest single-day jump since the pandemic began, and nearly 200 cases per 100,000 people over the past week.

Culture Minister Roselyne Bachelot told Le Parisien newspaper she is negotiating for exceptions to a month-long curfew between 9pm and 6am across the Paris region and eight other metropolitan areas.

The curfew comes into effect at midnight on Friday, and France is deploying 12,000 extra police to enforce it.

“The French culture world isn’t invincible, it needs help,” author and filmmaker Yoann Sfar, who has a new movie coming out, said on Friday on RTL radio.

One cinema chain will start opening at 8am in hopes of making up evening losses.

Since Paris restaurants generally open at 7 or 7.30pm for dinner, some might close altogether because it no longer makes financial sense to stay open for such a short shift.

Meanwhile, a Berlin court on Friday suspended a curfew on bars and restaurants, joining other courts in overturning government-imposed measures meant to contain the further spread of the coronavirus.

Berlin’s local government had a week ago imposed a night-time curfew from 11 pm to 6 am to tackle surging numbers of new infections.

“The curfew has been suspended for the time being as the court considers it disproportionate in view of other measures taken to fight the pandemic,” a spokesman for the administrative court in Berlin said.

The court said there was no evidence bars and restaurants that stick with existing rules on mask-wearing and social distancing contributed to any increase in infection rates.

Several other German cities, including financial hub Frankfurt, have also imposed a curfew on bars and restaurants, and Germany’s states agreed with chancellor Angela Merkel this week that such measures should be automatic as soon as infection rates in any area exceed 50 per 100,000 residents over a week.