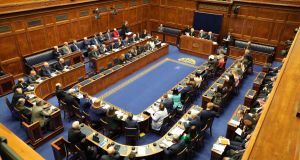 Northern Ireland’s MLAs have agreed a process to return a controversial £1,000 pay rise.

On Thursday the Assembly Commission determined that it was not legally possible to prevent the pay increase from coming into effect, as it had been implemented following a determination by an independent panel.

Instead the North’s five main parties have decided that assembly members should either return the money to the public purse through the Commission to the Northern Ireland Consolidated Fund or donate it to charitable causes through schemes such as Give As You Earn.

In a letter to the Assembly Speaker from the five parties represented on the Assembly Commission following a meeting on Thursday, they said they had agreed that “inflationary increases to MLA salaries and any salary increase should not be retained by MLAs until the review of the work of the Independent Financial Review Panel (IFRP) is completed or until the end of the mandate.”

They also said it was “vital to protect the principle that MLA salaries should be determined independently and not by MLAs.”

The £1000 pay rise came into effect following a determination by the IFRP in 2016. It was part of an annual uprating, and should have been awarded in £500 increments in 2018 and 2019, had the Assembly been sitting.

The uprating - which raises MLAs’ total salary to £50,500 per year - automatically came into force once the Assembly was restored. Their salaries are due to rise by a further £500 in April.

Many MLAs had expressed their opposition to the pay increase, which they said was unjustified. A number, including all of the SDLP’s MLAs, had already said they would donate the money to charity.

In the letter, which was signed by the DUP, Sinn Féin, the SDLP, Ulster Unionist Party and Alliance, they said that at the meeting of the Assembly Commission they “recognised the understandable public concern in relation to the payment of inflationary increases to MLA salaries and used the opportunity to clarify a number of points in relation to the legal position.

“As was noted, no MLA or party sought or has supported an increase in MLA salaries and the inflationary increases arise automatically from the 2016 Determination by the Independent Financial Review Panel.

“It was also noted the 2018 Determination introduced by the then Secretary of State Karen Bradley preserved the inflationary increases but suspended them until an Executive was formed.

The Speaker, Alex Maskey, said that following “my meeting with representatives from the five parties on the Assembly Commission this afternoon, I have received a joint position from those parties.

“I am encouraged by the constructive cooperation which the parties have shown to deal resolutely with this difficult issue.”

The SDLP chief whip Colin McGrath said the commission had been unable to stop the rise being implemented. “That money is going to come to us, that is set in law,” he said. “But the parties have worked hard together today and have now set in stone a process which will enable us to give that money back.”

He said a new salary review panel was due to be constituted. Should it not make any determinations before the end of this mandate, Mr McGrath said, “each of the increases that come in on the first of April will move into this scheme, so there will be extra money for charities or extra money for the public purse. It is unjustifiable at this stage that it goes to MLAs,” he said.