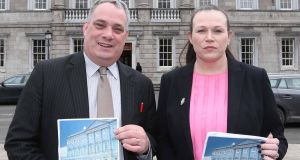 Sinn Féin has said it will press for the introduction of universal voting rights in the new Seanad, which will be elected next month.

Aengus Ó Snodaigh TD said yesterday it would form part of the party’s proposals to reform the Upper House.

He said the party would use the Seanad as a platform to put forward its policies, including protecting the most vulnerable citizens.

Nominations closed yesterday for the 43-member vocational panels, paving the way for the campaign to begin in earnest. The electorate is made up of 949 county councillors, the 158 members of the new Dáil, and members of the outgoing Seanad.

Defeated Fine Gael TD in Cork South-Central Jerry Buttimer and councillor Neale Richmond, from Ballinteer in Dublin Rathdown, are among the candidates on the labour panel. Noel Coonan, who lost out in Tipperary, is running on the agricultural panel.

Independent Gerard Craughwell is seeking re-election to the labour panel.

Retired District judge Seán Mac Bride, from Donegal, is a candidate on the cultural and educational panel.

Man pleads guilty to participating in activities linked to Patsy Hutch murder plot 13:36
Probationer Garda takes legal action in attempt to prevent dismissal 13:31
Temporary release of up to 200 prisoners in North announced 13:28
Coronavirus in Ireland: 22 outbreaks in nursing homes as 389,000 seek assistance 13:14
Flight to China to collect Covid-19 supplies forced to turn back 13:07