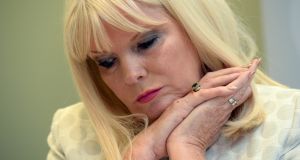 Mary Mitchell O’ Connor: legislation would be required if she was to accept the pay increase for her appointment as a super junior Minister by Taoiseach Leo Varadkar. Photograph: Cyril Byrne

Mary Mitchell O’Connor may be forced to forego a pay increase to keep her role as a super junior Minister.

Ms O’Connor was appointed a Minister of State with responsibility for higher education in Wednesday’s reshuffle by Taoiseach Leo Varadkar.

The position will allow her to sit at the Cabinet table and should give her an extra €16,288-a-year allowance.

However, legislation would be required if she was to accept the pay increase for the position.

Fianna Fáil and Labour have vowed to block the appointment of a third super junior Minister and the pay increase for Ms O’Connor.

A Fianna Fáil senior source said this was not a personal attack on Ms O’Connor, but the party could not support such a move.

“There is no appetite from us to support legislation that is only required because Leo Varadkar needed to ease the pain of a demotion.

“We are not here to support internal Fine Gael issues. This is his mess and he has to fix it.”

Existing legislation says the Taoiseach can appoint a maximum of two super junior ministers to sit at the Cabinet table.

The legislation provides for an extra €16,288-a-year allowance in addition to the minister of State salary of €124,439. Paul Kehoe and Finian McGrath are currently super juniors.

The Oireachtas would have to pass legislation to create the position for a third super junior.

Labour leader Brendan Howlin called on Mr Varadkar to outline how he will address the issue. Mr Howlin said it was not fair to suggest Ms Mitchell O’Connor should be paid less than the others around the Cabinet table.

“Or does he really propose to prioritise legislation to give extra pay increases to Ministers at a time when there are plenty of other issues that should be prioritised?”

Minister for Finance Paschal Donohoe said any legislation in relation to the third super junior position was “a long way down the line”. Ms Mitchell O’Connor could not be contacted for comment.

Meanwhile, Mr Varadkar is coming under renewed pressure over his selection of ministers of State. Mr Varadkar has few positions to fill but has a number of expectant backbenchers.

Sources close to the Taoiseach told The Irish Times he was reluctant to demote any Minister of State who supported him. This means Catherine Byrne, Patrick O’Donovan, Sean Kyne, Pat Breen, Helen McEntee and Andrew Doyle may be safe.

He is also expecting to retain Damien English as a Minister of State, but other supporters of Simon Coveney, including Marcella Corcoran Kennedy, Dara Murphy and David Staunton, are at risk of demotion.

Some of his key supporters believe he should demote all those who backed Mr Coveney in the Fine Gael leadership contest.