How will the DUP exercise its new-found power? 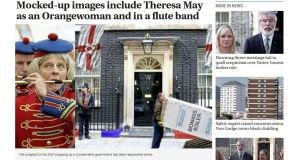 Theresa May in a unionist band: The DUP has seen itself mocked in tweets, news websites and cartoons

Arlene Foster must be feeling rather like Liberace. Remember when he was derided for his camp flamboyance and his ersatz piano renditions of the classics. “I’m crying all the way to the bank,” he responded.

Well, Arlene Foster is crying all the way to the bank of Theresa May.

After all, she has 10 MPs on her team, and regardless of how loud, strident or hysterical the reaction against her and her party, she is going to use their leverage to wrest as much as possible from the British prime minister.

Why would she worry?

Still, it must have given her some pause for thought that, despite the DUP protestations of loyalty and adherence to the British union, for broad sections of the English commentariat and for social media warriors the DUP is, as Brendan Behan might have said, just a bunch of Paddies on the take.

That’s not to deny that some of the depictions were funny. May in full regalia playing in a loyalist flute band; Queen Elizabeth looking grimly out her window and moaning, “She’s bringing the bloody DUP, Philip”; huge biomass boilers being installed in Downing Street with coppers wearing Orange collarettes looking on; the red, white and blue kerbing on the same street all raised a smile.

It certainly cheered up Gerry Adams. “The focus by the mainstream British media on the DUP’s policies and history is belated but a welcome education for people in Britain.”

But surely the Sinn Féin president, sensitive to anti-Irishness, must have been surprised by the British patronising and caricatured portrayal of the DUP, and by extension the 292,000 people who voted for the party last week: a bunch of Neanderthal knuckle-draggers was the message.

Again, another form of Paddywhackery, but this time directed against Northern unionists.

Even Channel 4’s esteemed Jon Snow could not resist tweeting to the world his description of the DUP as “one of the most extreme political entities in the British Isles”. Like a UK Taliban, one supposes.

He later posed for a picture in London with Sinn Féin’s seven MPs, which was nice.

While some of the commentary aligned the DUP as in cahoots with the UVF, Red Hand Commando and the UDA, the DUP’s Jeffrey Donaldson was insistent that his party did not “seek the support or endorsement of any paramilitary organisation, and we reject any such endorsement”.

And if East Antrim MP Sammy Wilson is the DUP’s leading climate change sceptic, it must also be pointed out that is not the universal view within the party.

And here one can’t but mischievously point up the DUP’s green credentials by the fact that its Ministers, including Foster, were the driving force behind the Renewable Heat Incentive scheme – a multimillion pound disaster certainly, but very eco-friendly.

And if some DUP politicians and members, as is their absolute right, believe the earth was created 6,000 years ago they are an evangelical sub-set of a sub-set within the party and its support base.

Equally, there never was a prospect that the DUP would seek to change social legislation in Britain.

There are still some homophobes within the DUP for sure, but most members are a long way from the “Save Ulster From Sodomy” campaigns of the 1970s. Making poisonous remarks about the LGBT community can cause trouble, as some chastened members have learned.

Foster, when questioned on this issue, said the DUP had a traditional view of marriage, but that “does not mean in any one way that we are homophobic”. Northern Ireland society is changing, and so is the DUP.

Still, there is no doubt some of them can be a rum bunch and many are not so finely attuned to the PC strictures of the modern world. But generally they are true to themselves.

The basic point about the DUP is what you see is what you get. “A politically and socially conservative party,” is how it describes itself. It is what is says on the tin, a right-of-centre party.

In a democracy that is permitted. Tories and liberals and those in the middle always will be fighting political and social battles, and the DUP, while more conservative than most, is just part of that perpetual struggle.

But how will it exercise its new-found power? What will it want from May to keep the Tories afloat?

We don’t know yet for sure, but we can hazard reasonably educated guesses.

The DUP has politically sophisticated leaders and advisers who should have a good grasp of how far to push the deal with the Tories. These are politicians, after all, who for most of 10 years were able to share power with their mortal enemies in Sinn Féin and run a functioning Executive.

They should also know that if they over-play their hand that May could call their bluff and challenge them to get into bed with Jeremy Corbyn, which they would never do.

So, initially at least, the DUP will be focusing on what one party source described as “brass tacks” matters – jobs, health, education, infrastructure, lowering corporation tax, promoting tourism.

In light of the Isis threat it may also press for stronger UK counter-terrorism measures to be introduced.

But if this confidence and supply arrangement beds down and keeps the Tories in government for a reasonable period ahead then inevitably there will be grassroots demands for movement on sensitive and potentially destabilising issues.

Former DUP Assembly member Nelson McCausland who lost his North Belfast seat in March already has admitted as much. He said there should be a focus on maintaining the “Britishness of the United Kingdom”, including increasing the number of “designated days” for flying the union flag.

Portadown Orangemen who for 20 years have been prevented from completing their annual Drumcree parade past the nationalist Garvaghy Road – and who still each Sunday make a symbolic parade to a police line seeking to complete that parade – said it trusted that the “parading issue, especially in Portadown, will be high on the agenda for the new government”.

The Rev Mervyn Gibson, grand secretary of the Orange Order, said that as well as parades and flags his organisation would push for movement on issues such as victims and the redefinition of a victim so as to exclude paramilitaries injured or killed in the Troubles, “ensuring the past is not rewritten”, and limiting what he termed inquiries biased against the police and British army.

But he did add a qualification. “Are we saying to the DUP here is a list of things that you have to get before you sign up to a deal? No, not at all.”

While Foster and the leadership may want to keep the deal to practical matters it is a given that there will be pressures from rank-and-file unionists on issues that could be divisive. Resurrecting rows over the union flag, parades that are long settled, and straying into areas such as special treatment for former British soldiers is not the road to cross-community harmony. The DUP leadership should know that.

The best way of maintaining political and social equilibrium may be the return of the Northern Executive and Assembly. If that happens – and ultimately it is down to Adams and Sinn Féin to determine if and when Stormont returns – then it will be in the interests of Foster and the DUP to keep all sides of the community content with what it can dig out of May and the Tories. Deviation from that principle won’t be tolerated by Sinn Féin in any new Stormont administration.

But if the current talks fail and it is a case of direct rule from Westminster, what then will there be to play for?

The tendency may be for the DUP to succumb to Orange Order and other urgings and to load the goodies on the unionist wing of the divided house. Think of all the added angst and rage that would engender.

One should never be hugely hopeful in Northern Ireland, but maybe the best thing for all sides to do is get Stormont back up and running, and bank whatever the DUP can extract from the Tories.