Leo's lineout: ‘You think that’s bad – wait till you see the carnage on Tuesday’ 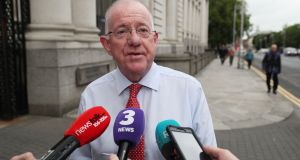 Charlie Flanagan: made his views on staying in Foreign Affairs known but ultimately acceded to his move to Justice. Photograph: Brian Lawless/PA Wire

The pain was etched on Galway West TD Seán Kyne’s face. So much so, the Moycullen man could not speak. He had just learned that he would be no longer minister of state for the Gaeltacht.

He had heard the news, sitting in the Dáil chamber, when newly-appointed Taoiseach Leo Varadkar announced that Donegal’s Joe McHugh was getting that role.

It was a huge blow to Kyne: “He was devastated. There’s no way of describing it. It came as a bolt,” said a TD from a nearby constituency later. “The least they could have done was make a courtesy call of 30 seconds.”

Nearby, a cluster of prominent Varadkar supporters sat and raked over the coals. “It’s completely underwhelming, one of them told The Irish Times. “All the old stock are back in.”

Another commented: “You think that’s bad. Wait till you see the carnage on Tuesday when all those people find out they are not getting new jobs and that they are going nowhere.”

And so it will be. When he returned from Áras an Uachtaráin on Tuesday afternoon, the new Taoiseach had about two hours to finalise his new Cabinet before announcing it in the Dáil at 6.35pm.

But as has happened with every new cabinet, the process did not run smoothly. Soon, the whispers started that some meetings were going on longer than scheduled, of feathers being ruffled, and of resistance.

Unlike the euphoric scenes outside the Dáil a few hours earlier, when the parliamentary party formed a guard of honour for the newly-elected Taoiseach, the atmosphere was now tense in Government Buildings.

The earliest called in were the ones staying where they were – the likes of Michael Creed in Agriculture.

But then came the delays. Charlie Flanagan had let it be known for weeks that he wanted to stay in Foreign Affairs. Flanagan happened to be up in the North that day. As he came out of a meeting in Stormont he was met with a barrage of speculation Simon Coveney had been given Foreign Affairs.

“All the rumours made it look terrible for Charlie. It pulled the rug from right under him and undermined him completely,” said a Flanagan supporter.

There was a belief among some some TDs close to Flanagan that Coveney had cajoled Varadkar into giving him Foreign Affairs. That was denied by his people who said that while happy with the move, he was asked to go there. Flanagan made his views on staying known but ultimately acceded to his move to Justice.

All cabinet reshuffles leave noses out of joint. This one, however, was as minimal as they come but it still involved almost disproportionate grievances. Varadkar’s big difficulty was an undertaking he had given to Ministers they could remain in Cabinet in return for support.

“I do not think he needed to do that,” said a backbench TD. “It left him as a hostage to fortune. Once the massive momentum went to him in the race , all the Ministers started plumping for him. He had only two places to fill.”

Around six o’clock, it became clear Eoghan Murphy and Michael Ring had filled those two slots. For the veteran Mayo TD the promotion would be his “swansong”, as a colleague put it.

It was clear there was still some “uisce faoi thalamh” around the appointments. Chief whip Regina Doherty came into the Dáil at 6.35pm to request for an adjournment of an hour. At that stage, Doherty herself did not know her fate. Shortly afterwards she was called in by Varadkar. Immediately afterwards, she made her way down to the Leinster House 2000 annex where a small group of her supporters had gathered. The embraces signalled good news – she was the new Minister for Social Protection and Labour Affairs.

But that meant that there was at least one casualty. Soon it became clear it was Mary Mitchell O’Connor. The Dún Laoghaire TD was being demoted. A new “superjunior” position was being created. It allowed her a seat at Cabinet but not a vote.

“She was devastated. Her emotion was obvious,” said a colleague.” She resisted the move but after a long conversation with Varadkar in his office, he did not sway. She was offered the Justice and Equality role. Clearly unhappy, she departed without the matter being fully resolved.

With the extra hour coming to an end there was flurry of activity. Mitchell O’Connor came back into Varadkar and asked for an education role instead. There followed a series of hurried contacts with Minister for Education Richard Bruton, before it was agreed she would have “higher education”.

Bruton himself has not had a great couple of weeks. He had expressed a desire to go to an economic portfolio but that was not happening. His name had then been persistently linked to Justice, which a colleague said he resented. Now Mitchell O’Connor was eating at least some of his dinner, to employ the phrase. It was annoying but in public he appeared sanguine.

It was rushed and cobbled together, but at least the deal was now done by the young Taoiseach. Mitchell O’Connor trooped down the stairs of the Dáil with her colleagues, putting a brave face on it.

“The manner in which it was done is no different to all cabinet appointments over many years – politics is fast-paced, and can be perceived as harsh, but I’ve dusted myself down,” she said on Friday.

“I was a little disappointed. But that was genuinely overshadowed with what was happening in the UK that day and pragmatism took over, given how pleased I was on the portfolio in question.”

Many of the unchosen in Fine Gael hung around the self-service restaurant. Most knew there would be few changes but it did not hide the ire of some. “It’s completely underwhelming. All of the Enda lackeys are there,” said one, clearly exasperated by it all.

“It doesn’t do much for me, especially when he’s going on so much about a generational shift.”

But more was to come. One of the very late announcements was the new Chief Whip. One of Varadkar’s most loyal supporters, John Paul Phelan from Kilkenny, had been widely tipped for this but it went, instead, to Donegal TD Joe McHugh.

There was no doubting Phelan’s disappointment – and, unusually, he was not in the chamber for the subsequent debate. Over the next 24 hours he reconciled himself to the reality.

The predictions about the unhappiness to come for many next week are right. There are 15 TDs – Varadkar supporters all – who believe themselves primed for appointment.

But only five or six will get preferment, which will promote more disgruntlement among the ranks. There will be no mutiny but Varadkar’s generational shift has got off to an uneasy start.