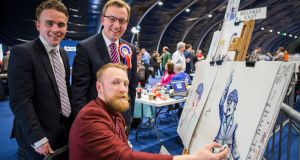 The Democratic Unionists and Sinn Féin are on course to retain their grip on power at Stormont as the Assembly election count passed its half way point.

While the two parties are set to solidify their positions as the largest parties on their respective sides of the traditional unionist/nationalist divide, independents have also notched some significant scalps.

The People Before Profit Alliance has secured two seats in the Assembly chamber, with Gerry Carroll elected after topping the poll in Sinn Féin’s West Belfast heartland and party colleague Eamonn McCann joining him from Foyle.

At 0.15am on Saturday, with some constituencies still counting, 66 of the 108 seats were filled. The Democratic Unionists have won 29, Sinn Féin 17, the Ulster Unionists eight, Alliance and the SDLP have five each, with People Before Profit Alliance and the Traditional Unionist Voice (TUV) landing one seat each so far.

The DUP went into the election with 38 seats and Sinn Féin 29.

DUP leader Arlene Foster expressed confidence she will be returned as Northern Ireland’s first minister, as her party was assured of again emerging as the region’s largest party.

Mr McGuinness, who topped the poll after returning to stand in his native Foyle, admitted some voters had turned away from the mainstream parties.

But he insisted the swing to Independents and smaller parties would not be that significant and claimed Sinn Fein could still secure 30 seats.

“In all probability all major political parties will go down a bit – not that significantly in my view,” he said. “At this stage, we can say with considerable confidence that the ball park figure of 28, 29, 30 MLAs is eminently achievable (for Sinn Fein) even at this early stage. I think that is pretty remarkable performance.”

In a clear sign the larger parties will not have it all their own way, Mr Carroll stormed home in west Belfast with more than 8,000 first preferences.

“For all the parties we will be a thorn in their side and I think it is needed,” he said. “You hear all this talk about a different type of politics and we hope we provide that for the next term.”

Among the most high profile political casualties was Independent John McCallister who lost his South Down after nine years.

A number of others, including the Alliance Party’s Naomi Long and Sinn Féin’s Michelle Gildernew will be making a return to the Stormont benches after previously serving as MPs.

Jenny Palmer, who quit the DUP amid allegations she had been bullied, took a seat from her former party when she was elected for the Ulster Unionists in Lagan Valley.

UUP leader Mike Nesbitt said he was surprised to top the poll in Strangford.

Former DUP Health Minister Jim Wells, who was embroiled in a series of controversies in the last term, was also re-elected in South Down.

The count for the 18 constituencies in the proportional representation contest began at 8am on Friday with the process of verifying ballots. It is set to finish on Saturday afternoon.

The poll was the first chance to vote for people born after the historic Good Friday Agreement.

Eighteen years on from the signing of the 1998 peace accord which paved the way for a devolved power-sharing government, voters were selecting the latest batch of MLAs to represent them at Stormont. There were 276 candidates standing across the 18 constituencies.

The overall turnout of valid and invalid votes has fallen on the 2011 Assembly election, but only slightly. More votes were actually cast than five years ago, but in the context of a larger electorate.

The 33-year-old, presiding over his first election in charge of the party, said early results appeared to show a voter trend in the Republic spreading across the border.

Gardaí making ‘good progress’ on Cork attack where man was set on fire 20:24
PSNI’s Deputy Chief Constable set to retire at end of month 20:07
Colm Burke vows ‘not to be deterred’ after Cork office was vandalised 19:47
Finding of poor professional performance against GP over thyroid cancer case 19:41
Work-to-rule by school secretaries suspended to allow for new talks 19:33
SUBSCRIBER ONLY