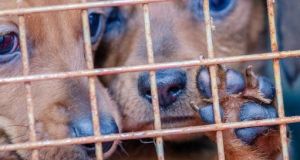 The puppy farms “are a profit-making operation churning out puppies all the time”. Photograph: Getty Images

New dog-breeding guidelines to combat Ireland’s reputation as the puppy farm capital of Europe will be published by the by end of June.

Minister of State for Rural Affairs Sean Kyne has said he wanted to see “the highest standards achieved by dog-breeding establishments in Ireland”.

The Minister said he would meet the commitment he made to publish the guidelines by the end of June following a detailed consultation process, which he described as “robust” and which included a large number of submissions.

Mr Kyne said there had already been improvements, including a drop in the number of dogs being put down every year.

The issue was raised in the Dáil last week when Independent TD Maureen O’Sullivan said she had checked a website and discovered it had “2,000 ads selling puppies and that does not take into account the number of puppies available on each of those ads”.

The puppy farms “are a profit-making operation, churning out puppies all the time”, the Dublin Central TD said.

“We know the appalling conditions on some of the farms,” she said, and warned that the guidelines should include a provision that inspections of such dog-breeding establishments should be unannounced. “The problem with inspections is that they are by appointment, and the dog breeders know when the inspector is coming”.

She also criticised the level of enforcement as not strong enough because if a fault was found the only penalty was a notice to improve.

Ms O’Sullivan, who with Independents4Change TD Clare Daly has repeatedly raised animal welfare issues in the Dáil, said three Government departments – Agriculture, Rural and Community Affairs and Culture – had responsibility for the issue, “and when it falls between the cracks like that, abuses take place”.

She also said the issue of whether puppy farms should be allowed to operate at all had to be considered. “Puppies are not livestock and are not bred for slaughter or food production. I hope the guidelines will be more robust and have severe enforcement aspects.”

Mr Kyne said some of the submissions took the view that it should be entirely within the Department of Agriculture, where vets had a role. Local authorities, however, have ultimate responsibility for enforcement, and he had had discussions with local authorities and animal charities.

He agreed with Ms O’Sullivan’s concerns about the advertising of dogs for sale on websites, but said she should take revenue issues up with the Minister for Finance.