No female TDs elected in almost a third of constituencies 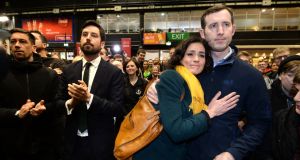 Twelve of the State’s 39 constituencies did not elect a woman to represent them in the 33rd Dáil.

When the counting of general election votes concluded late on Monday night, 36 women had been elected in 27 constituencies, meaning female TDs will take up 22.5 per cent of the 160 seats in the Dáil.

Some of the high-profile female politicians who lost their Dáil seats, including a number prominent in advocating for the repeal of the Eighth Amendment, blamed the Sinn Féin surge for the loss of their seats. A number of these said the issue of abortion did not feature in a major way on the campaign trail.

The four-seat Dublin West constituency, home to the Taoiseach, went from having two female TDs to being exclusively male, with Solidarity’s Ruth Coppinger and former Labour tánaiste Joan Burton losing their seats.

Lisa Chambers, who was Fianna Fáil’s Brexit spokeswoman in the last Dáil, attributed the loss of her seat to the swing towards Sinn Féin in her constituency, where her party’s deputy leader, Dara Calleary, held his seat.

Katherine Zappone, the Minister for Children, also lost her seat and has decided to bow out of politics. She said she might have suffered due to voters not distinguishing her, an Independent member of Government, from Fine Gael.

“I do think in the earlier period of the campaign people were willing to distinguish me as an Independent from Fine Gael, but as time went on, maybe that didn’t transpire as much,” she said.

Holly Cairns, who was elected in Cork South-West for the Social Democrats, is now the only female TD in Cork city or county. She said main political parties were not doing enough to ensure more women were elected.

She said her party would enter the 33rd Dáil with two male and four female TDs and that, when the party organised an event, free childcare was provided.

“This means there isn’t a barrier for women,” she said.

Fifteen of the 46 new TDs are female but another 12 women were among the 32 TDs who lost their seats. Among the new faces will be Sinn Féin’s Mairéad Farrell, Sorca Clarke, Patricia Ryan and Rose Conway-Walsh, and Independent TD for Wexford Verona Murphy.

The results have disappointed organisations supporting female candidates including Women for Election and the National Women’s Council of Ireland (NWCI).

Ciairín de Buis, the chief executive of Women for Election, said the outcome was inevitable given that the three largest parties did not run a balanced ticket, unlike the smaller parties. Ms de Buis said the parties treated the 30 per cent gender quota as a target rather than a minimum requirement.

Fine Gael said it introduced the gender quotas and had a record number of women in its Cabinet, while Fianna Fail said that with 26 women among 84 candidates, it had the largest number of female contestants of any party.

Sinn Féin did not respond to a request for comment but 13 of its 37 TDs are women, the largest number of any party. Some 40 per cent of Green Party candidates and two of its 12 TDs were women.