Taoiseach welcomes appointment of outsider as ‘good’ for Irish policing 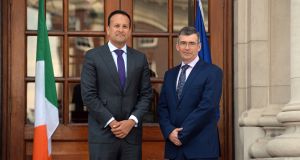 The Government expects newly appointed Garda Commissioner Drew Harris to bring a number of key advisors with him when he takes up his position later this year, but he will not replace senior gardai with police officers from elsewhere

In a significant departure for An Garda Síochána, a candidate from outside the jurisdiction was chosen for the role of commissioner for the first time, with Mr Harris beating strong internal competition from Deputy Commissioner John Twomey and Assistant Commissioner Pat Leahy.

It is a sea change for the Garda to have a leader from another jurisdiction and it is the first time in its history, but political sources said Mr Harris’s profile as someone from outside but with close knowledge of the force made him ideal for the role.

The Garda has suffered from years of controversy over various scandals, with the last two commissioners retiring abruptly.

Government figures said they expected and were “hopeful” Mr Harris would recruit his own team to assist him with his new position, but this is expected to be limited to administration and secretarial staff. All resources would be made available to ensure that happened, one stressed. However, this is likely to be contentious for many within the Garda force.

The selection process was independent of Government, but Ministers enthusiastically welcomed the move on Tuesday with Mr Varadkar hailing the appointment from the steps of Government Buildings.

The Cabinet yesterday ratified the appointment of Mr Harris, who is currently the Deputy Chief Constable of the Police Service of Northern Ireland, nine months after the departure of former commissioner Nóirín O’Sullivan from the role.

Mr Harris will replace Acting Commissioner Dónall Ó Cualáin, who will be retiring from the force in September. Mr Harris will be paid a salary of €250,000.

Speaking after the appointment was confirmed, Taoiseach Leo Varadkar defended the decision to appoint an outsider to the role and to oversee the State’s national security.

Mr Varadkar insisted Mr Harris would be “loyal to the police and loyal to the State” and would steer policing in the right direction.

“It is a good moment for Irish policing, it is an opportunity for new leadership and for policing for the community,” Mr Varadkar added.

On taking up the post, Mr Harris will be required to make a solemn declaration under section 16 of the Garda Síochána Act 2005 including to uphold the Constitution and the laws of the State.

Mr Harris is entitled to dual Irish and British citizenship because he was born in Northern Ireland, and a Government spokesman confirmed he had applied for an Irish passport.

Mr Harris was one of five individuals in the final round of interviews for the role. Assistant Commissioner Leahy and Deputy Commissioner Twomey were the only two internal candidates to make through to the last stage of the competition.

The others were based in Scotland and England. However it is understood one of those withdrew from the process in recent weeks.

Mr Harris has served principally in Northern Ireland, including 12 years in senior leadership roles. He has served as Deputy Chief Constable since 2014, where he is believed to worked closely with the British security services.

His father, also an RUC officer, was killed in an IRA car bomb in 1989. His mother survived the attack with minor injuries.

Garda sources said Mr Harris would be a target for dissident Republicans, whose stated aim has been to attack the security services of Northern Ireland.

A security assessment will be carried out around Mr Harris and his routine as commissioner and additional precautions would be put in place, the sources said.

This was likely to include security measures, including armed gardaí, around where he will live when in Dublin and also around his travel between the Republic and the North.

His travelling around the Republic in the course of his work as Garda Commissioner would also be security profiled and addition security precautions put in place.

Some Garda sources believed his plans to attend some events would not be publicised in the open way the plans of previous commissioners have been.