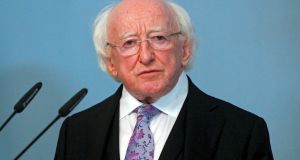 As the incumbent, President Michael D. Higgins can nominate himself for a second term. Photograph: Toms Kalnins/EPA

President Michael D Higgins has informed senior Government figures he is to seek a second term in office.

The Government has provisionally set a date of October 26th for the vote, which will coincide with two referendums on the issue of blasphemy and the woman’s place in the home.

The Irish Times understands Mr Higgins has indicated to a number of Cabinet Ministers his intention to stand again, ahead of a formal announcement next month.

The President has given a number of statements in recent weeks hinting at his desire to secure another seven years in Áras an Uachtaráin and is said to have informed figures in Leinster House of his likely candidacy.

Meanwhile, Fianna Fáil leader Micheál Martin has privately stated his party will not field a candidate in the presidential election, if one occurs.

His party had passed a motion last year calling for it to participate in a contest. However, it is understood Mr Martin has told party figures it was his strong belief that there should not be a Fianna Fáil candidate on this occasion.

As the incumbent, Mr Higgins can nominate himself for a second term but has the public support of several Cabinet Ministers including Shane Ross, Charlie Flanagan, Richard Bruton, Eoghan Murphy and Simon Harris.

Taoiseach Leo Varadkar has said he will wait until Mr Higgins publicly declares but believes there would be strong support for a second term.

Mr Higgins had said during the 2011 presidential election campaign that he would only be a one-term President but comments in recent weeks have seen him shift from that position.

Senator Gerard Craughwell is the only person to have confirmed he is seeking to run against Mr Higgins. Candidates require the signature of 20 Oireachtas members or four local authorities to sign his nomination papers.

Sinn Féin leader Mary Lou McDonald has said her party will field a candidate if there is a contest. However, Ms McDonald has insisted Sinn Féin is very supportive of Mr Higgins.

A spokesman for the President declined to comment on whether Mr Higgins had informed Government of his intentions.

He confirmed the President would “make his intentions known in early July”.

The possibility of a presidential election was discussed at Cabinet in recent weeks when Minister for Justice Charlie Flanagan sought approval to hold two referendums.

Mr Flanagan has secured Cabinet approval to hold a vote on removing the offence of blasphemy from the Constitution and a separate one on deleting a constitutional clause on the place of the woman in a home.

One Government source said: “There was talk about whether there would be one or not but nothing about Michael D’s intentions. There was one remark from a Minister, who shall not be named, who said the only person who could beat Michael D would be Daniel O’Donnell.”