E-scooters should be legal on Irish roads, report recommends 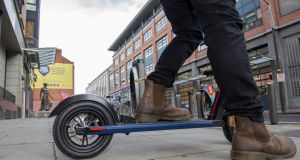 Electric scooters are currently not regulated in Ireland and are technically illegal. Photograph: Dave Meehan

A Government-commissioned report on the use of electric scooters has recommended that moves should be made to make them legal on Irish roads.

However, the report submitted to Minister for Transport Shane Ross is also understood to raise a number of significant safety concerns about the new form of transport, both for those who use the scooters and other road users.

The report was commissioned by the Road Safety Authority (RSA) and researched the current situation in relation to e-scooters in other countries, particularly other EU member states. It also examined the safety implications in the use of electric personal mobility devices.

A source with knowledge of the report said the research had broadly come down in favour of e-scooters being allowed on Irish roads, but also pointed to the need for very strict conditions including licensing, speed restrictions and visibility.

It is understood the Garda, which has been one of a number of strong dissenting voices on the issue, expressed opposition to legalising the scooters on the grounds that they are potentially dangerous and would pose a risk to users and to others who use roads and cycle lanes.

Mr Ross is expected to announce in the coming days that he will begin a short and focused public consultation on e-scooters in the autumn.

It is understood the Minister will announce a two-month public consultation starting on September 1st and concluding on October 31st. Submissions are expected from e-scooter advocates; cyclists; pedestrians; motorists; transport organisations such as the AA; haulage operators; bus companies; and road planners.

According to the source, once that process has been completed, Mr Ross will move quickly to address the issue of whether or not e-scooters should be allowed on roads. Road safety would be his paramount concern when making his decision, the source said.

If Mr Ross does decide to allow e-scooters, it will be subject to very strict criteria. At a very minimum, a legislative basis for their introduction will be required which will mean that those who use scooters will need to be licensed, and that there will be limits imposed on speed.

The RSA submitted the report to Mr Ross on June 22nd and his officials have been examining it since then.

It looked at the current situation, mainly in other EU countries, and found very divergent arrangements in place. There was unfettered use in some places and very restricted use elsewhere, including bans.

Electric scooters are currently not regulated in Ireland and are technically illegal.

Most of the scooters are powered by rechargeable electric motors. Many are programmed not to exceed speeds of 26km/h. This, argues scooter users, should put them in the same category as bicycles and electric bicycles. However, some can travel at speeds well above 30km/h.

There have been a number of fatalities involving e-scooters over the past few years. In July, YouTube personality Emily Hartidge was killed in London when her electric scooter was involved in a collision. In the wake of her death, London’s cycling commissioner said e-scooters were unsafe and pointed out they were illegal.

The widespread use of e-scooters has also caused controversy in Paris where sharing companies, Lime and Bird, put hundreds of them on the streets of the French capital. The French government is drafting laws to prohibit scooters from being used on paths and pavements and to create a new category of vehicles for this form of transport.