‘Most of the people who were involved in the background of the troika were very smart . . . but they weren’t very good at politics’

Interview: Minister for Finance Michael Noonan is eager to maintain support for the recovery drive

Minister for Finance Michael Noonan speaks to Arthur Beesley, and raises the possibliity of an income tax cut in 2015. 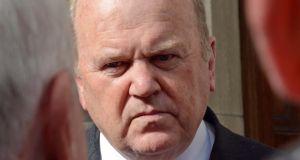 Minister for Finance Michael Noonan: “I made little progress with Trichet,” he says. “Draghi was the man I made progress with.” Photograph: Eric Luke

Rush-hour traffic on Merrion Street in Dublin is just about audible within the Department of Finance as Michael Noonan quietly muses on the lessons learned in the EU-IMF bailout and the challenges ahead for Ireland.

Noonan is back on the road, landing in Baldonnel in the early hours of Tuesday night from yet another round of political talks in Brussels. He was in London last week meeting bond market participants. At the end of January he goes to New York for engagements with investors there.

“It’s a very important milestone to get out of the bailout after three years,” he says.

Photo portraits of the Minister’s 25 predecessors line the room: everyone from Eoin MacNeill in the first Dáil to Brian Lenihan, who was in charge when control over the national finances was lost in 2010. If they’re not quite swaggering in Government Buildings these days over the imminent return of fiscal sovereignty, there’s no hiding the sense of satisfaction.

Yet Noonan says the troika was – in the round – a force for good in the Republic. He does not conceal his disdain for what he describes as a lack of political nous on the part of certain troika technocrats, but says the reforms undertaken to steer the economy back on to the rails were urgently required.

“If there was never a fiscal or banking crisis in Ireland most of the structural change which they put into the programme was necessary anyway. There are a lot of countries that don’t go into programmes, but their economies operate at a very low pitch,” he says.

Frustration
While the Government passed each one of the troika’s 12 quarterly reviews largely without incident, there was often a sense of frustration in the world of the international lenders that the new Irish administration should have gone further, faster. In troika circles the argument went that the 2011 general election gave the Coalition an overwhelming mandate for more radical action.

Noonan disagrees profoundly with that.

“Most of the people who were involved in the background of the troika were very smart, very competent technocratic people but they weren’t very good at politics. And what I mean by politics is the ability to take a programme forward and keep the support of the people in doing it. And unless you have a troika programme [that] has a buy-in from the people, it just doesn’t work.

“And it’s great to be talking when you’re there and you have a mandate [to] go forward. But the mandate was dependent on the programme that we offered to the people at the time of the election. There’s a skill involved.

“That’s the only criticism I would make of the troika. Some of their people, while being extraordinary people, didn’t understand that politics is an art and to deliver things you have to use the art of politics. And it’s not as simple as they made it out to be, as they found out in other countries.”

“Well, you know the other programme countries?”

He cites “total discontent” in riot-prone Athens, and lesser problems in Lisbon with the Portuguese bailout.

Noonan insists he and other Irish figures achieved “very close friendship” with some troika people, but he won’t name names when it comes to those who were politically deficient. He takes care, indeed, to say he is referring to “not all” of the individuals concerned.

“Some were politically astute, others weren’t,” he says.

So where did they reside? In which institutions?

“If I answered that I’d be very near to name-calling, so I don’t want to do that.”

But Noonan pointedly says the rigid stance of Jean-Claude Trichet, former chief of the European Central Bank, in relation to the Anglo Irish Bank promissory note scheme made his task as Minister more difficult.

Consensus
The Government campaign to scrap the dreaded notes took the best part of two years and Noonan believes there was clear potential there to jeopardise the social and political consensus behind the bailout programme. Such consensus, he says, was crucial to the eventual exit from the bailout.

“One of the great advantages that we had – and I think this generation of Irish people will never be forgotten for it – it was the cohesion in facing the sacrifices that had to be made and that they continued to back the Government even in significant numbers even when the decisions were very difficult,” he says.

Of the promissory note question, he says it was a big political issue for the Coalition.

“And certainly, if we had to pay out €3.1 billion as it was on the last days of March for the last two years. I think it’d be very difficult to maintain political support on that.”

“I don’t know whether the Government would have fallen or not, but its political support base would have been eroded, in my view. It was absolutely politically essential to get that. And of course it was economically and fiscally very important as well.”

This brings us to Trichet, who also blocked Noonan and Lenihan in their efforts to impose losses on senior bank bondholders. While the promissory note discussion started with Trichet, the deal was not done until his successor, Mario Draghi, was into his second year at the helm of the European Central Bank.

Trichet was always adamant there was simply no scope to do anything in relation to the notes. Noonan, clearly, had a different view. So was Trichet’s stance indicative of an approach within the ECB that was misguided or mistaken?

“Well, you know, strong personalities in any institution drive policy and Trichet drove policy in a particular direction. Draghi wasn’t as ideological – I suppose is the best word – about the policy and I had a lot of conversations with him,” Noonan says.

Noonan acknowledges the difficulty this created for him but observes that he has been in politics a long time.

“I knew we weren’t going to get an agreement the first evening, I knew it was going to be a process, and it was a question of getting a lot of allies and friends and people on my side. I did that systematically,” he says.

“Eventually the deal was done between ourselves and the Irish Central Bank and it was noted without dissent in Frankfurt. It was probably the only thing that was ever unanimously noted anywhere in the world.”

Trichet, of course, was not the only Frenchman to raise Irish hackles during the bailout. Then French president Nicolas Sarkozy infamously took aim at Taoiseach Enda Kenny at his first EU summit, two days after he took office, on the question of corporate tax. Sarkozy had previously launched into former taoiseach Brian Cowen.

So was it indecent or immoderate for Paris to so forcefully attack Ireland at a moment of great weakness on this front?

“We don’t hold a grudge but we remember,” Noonan says.

When it is pointed out to him that there was an attack from Berlin as well, he argues that it was “not at the same high level”.

Noonan insists there will be no return to auction politics, but he still perceives

an emergent opportunity to cut income tax as early as his next budget. His essential message is that the economy has turned.

“If the present rate continues of employment, about 50,000 jobs a year, there should be two million people at work at the end of our term of office,” he says.

“I don’t think getting [unemployment] below 10 per cent is an outlandish objective by the time we reach the end of our term in 2016.”

As the Minister describes it, this is part of a “national tapestry” in which a recovering economy takes the benefit of increasing activity in local and multinational business, the turnaround in tourism and momentum in the agriculture and food sectors.

Much of this is dependent on conditions in the outside world. While the US and British economies are moving rapidly, he remains concerned about the potential for another dip in Europe. “If we could get Europe to move as well we’d be in a very sweet position,” he says. “I suppose there are more risks, we think, externally now than internally.”

For all that, he says maintenance of public support for the recovery drive – “As long as everybody pulls together and holds their heads” – will be critical.