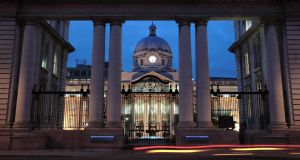 More than 700 civil servants have applied to be transferred out of Dublin, showing the need for a “more regionalised Civil Service”, the Fianna Fáil TD Éamon Ó Cuív has said.

Mr Ó Cuív, who is his party’s spokesman on regional and rural affairs, said the “surge” in relocation requests “in such a short space of time”, revealed through a parliamentary query to the Department of Public Expenditure, “shows there is clearly a demand for a more regionalised civil service.

“These figures show a large appetite for a move to the regions. Not only is it more affordable; many feel they would have a better quality of life. The spiralling cost of living, combined with unsustainable rental prices and long commutes, is making it less and less attractive for people to continue living in Dublin.

“Ministers need to take note of these figures and realise that the redeployment of Government staff and State agencies to regional and rural towns must be seriously examined and facilitated.”

Mr Ó Cuív has been a leading critic of the new National Planning Framework, which several Opposition TDs have claimed is overly urban and Dublin-centric.

The framework will set out a 25-year plan for how the country is to be developed, built and connected over the next decade; it will be voted on by the Oireachtas.

A special Cabinet meeting on the draft plan was held on Monday, and several Opposition TDs organised a public meeting about it at the Hodson Bay Hotel in Athlone, at 8pm on Monday.

Replying to Mr Ó Cuív’s query, Minister for Public Expenditure Paschal Donohoe said that “there has been a high level of interest in the scheme since its launch, with over 2,700 staff members applying for mobility”.

I nearly fainted at the sight of the cream. How can you call that carbonara?