Miriam Lord: The Dáil’s Dublin-rural divide turns into an abyss

With the Pro-Rural Lifers facing off against the Fancy-Dan Dubs, the muck is flying 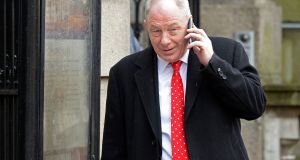 What side are you on?

In the Dáil, there seemed to be a very clear divide and little common ground on Tuesday. Arguments on this contentious subject have raged for years, but in recent months they’ve become louder and more intense.

Leo Varadkar said he needs more time to think about certain things and insisted, despite what some opponents may think, that he is not acting under pressure from his own backbenchers.

Also, he stressed he isn’t anti-anything and very much an “advocacy” man.

You only had to look at the big badge he was wearing on his lapel during Leaders’ Questions to know that. “Votes for Women”, it said.

And we all know what flowed from that concession 100 years ago: the floodgates opened and suddenly women were wantonly flaunting opinions and drinking pints.

Is rural disadvantage any different to urban disadvantage? Does quality of despair differ with a cityscape or scenic view?

Well, said Fianna Fáil’s Timmy Dooley, the Taoiseach might think everything is fine, but that’s only because he is turning a blind eye to the many people who are forced to travel in order to access their wages.

Independent TD Mattie would not like to be described as anti-Dublin because he isn’t. But what he is, and he is proud to say it, is a strong defender of rural Ireland. He is very much Pro-Rural Life.

Lately, whether in Dáil exchanges or sallies onto the plinth, there has been a distinct ratcheting up of anger from Fianna Fáil and Independent TDs who represent voters from outside Dublin and other urban areas.

Is rural disadvantage any different to urban disadvantage? Does quality of despair differ with a cityscape or scenic view? Is the grass always greener on the other side?

Leaders’ Questions opened on Tuesday with the Fianna Fáil leader taking aim at Leo Varadkar and his Government for breaking promises made to rural communities in areas such as broadband, transport, healthcare and community development.

And the session closed with the Green Party leader attacking the Taoiseach for not moving quickly enough on plans for a plebiscite on electing a mayor to run Dublin.

Between the two of them, it was enough to make anyone, no matter where they live, consider staying in bed for the foreseeable because there isn’t much point to doing anything else. The cities and the rural areas are collapsing around our ears.

If something isn’t done soon, Dublin will grind to a halt. The capital is in crisis, said Eamon Ryan, and it’ll crash entirely if a directly elected mayor isn’t installed to sort out the mess.

Fine Gael has not delivered on promises to rural Ireland. Instead, they have “undermined and arguably destroyed” Fianna Fáil’s internationally “lauded” Leader programme designed to revitalise the sector.

Not so, countered the Taoiseach, setting out a long list of things his Government has done to get things moving down the country. If anyone is responsible for making things difficult it is opposition politicians who keep “talking down” rural Ireland and undermining it.

Leo told the Dáil he favours advocating to undermining.

Micheál thought this patronising. And he has looked extensively into this issue.

“I have travelled the length and breadth of the country from Moville to Kanturk,” he announced, indicating he talks to the plain people of Ireland on a regular basis. He pointed this out because the Taoiseach had just informed him – in a nostalgic Enda Kenny flashback moment – that he too talks to people around the highways and byways, and they tell him they are very happy with his Government’s efforts on their behalf.

Not so, says Micheál. The people he encounters are fed up with Leo and his Cabinet not keeping their promises, and “they don’t like being talked down to by your good self. They don’t like lecturing from a Dublin-centric Government.”

His backbenchers were delighted. There was a little “oooh!” of appreciation when he stuck it to Leo’s fancy-dan Dubs across the floor.

The Fianna Fáil leader’s stock has been a little shaky among many of his troops in the last few weeks after he declared his support for the repeal of the Eighth Amendment and abortion within the first 12 weeks.

He reconnected with them yesterday.

And they heckled and sneered to their hearts’ content as the Taoiseach listed how much his Government has put into rural Ireland and how employment rates have surpassed targets.

The jobs are only there if people leave their areas and drive to work in the city, protested Timmy Dooley.

Mind you, as Micheál Martin observed, Leo didn’t address the questions about what exactly his Government plans to do about the broadband problem

As the Opposition howled in disbelief while the Taoiseach spoke of all his Government has done for rural Ireland, the Leas-Cheann Comhairle was forced to appeal for order. “I’ll not tolerate this. I’d ask you to restrain yourselves. You might not like what you’re hearing and I’m not responsible!”

To prove his bona fides, Leo introduced the man who has been appointed to oversee everything – his Minister for Rural and Community Development, Michael Ring.

“And I have him here beside me,” announced the Taoiseach, and a beaming Ring fit to burst with pride sat two seats away.

Mind you, as Micheál Martin observed, for all he talked about what had been done, Leo didn’t address the questions about what exactly his Government plans to do about the broadband problem.

That’s not the biggest problem in Dublin and other cities. There, it’s housing and planning and traffic gridlock, and things, said the Green leader, are getting out of hand. When will the Government produce a Bill on holding a plebiscite on a Dublin mayor?

On the way in Autumn, promised Leo, but there is a lot of thinking to do first to get it right.

“This is not an urban versus rural divide,” pointed out Eamon Ryan. “We all have rural and urban connections wherever we live in this country. It is not about Dublin versus the rest.”

As he sees it, the Taoiseach “seems to have a cunning plan at the moment whereby it will cripple Dublin with gridlock to try and help the rest of the country develop. That’s not a very clever . . . Speaking for Dublin, the city is in crisis. Every other city is the same.”

The Green Party leader said he’s been told that the Taoiseach’s own party members are blocking the Bill because “it’s pro-Dublin” and they don’t like it.

No backbenchers from outside Dublin have objected, replied Leo.