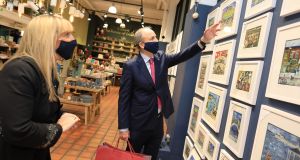 Taoiseach does a quick bit of Christmas shopping in the Kilkenny Shop on Nassau Street but all he really wants is a dozen com-it-tees as stocking fillers.

Micheál Martin has long been a dee-vo-tee of the com-it-tee.

What do you want for Christmas, Taoiseach?

Actually, he was spotted after Leaders’ Questions doing a quick bit of Christmas shopping in the Kilkenny Shop on Nassau Street, just a few minutes’ walk from Leinster House. Good man, Micheál, leading by example and shopping locally this year. What did he buy?

Not sure, but somebody overheard his conversation with the assistant.

“Can I have two steering groups please in the extra large? And if you could show me a few of those beautiful hand-woven advisory panels, I’m sure I’ll find something I like. Oh, and I’ll take a dozen of your finest artisan com-it-tees as stocking fillers. You can never have too many, that’s what I always say.”

So when Alan Kelly asked him in the Dáil on Tuesday to think very seriously about appointing a Vaccination Czar to oversee the rolling out of the Covid-19 vaccine when it finally arrives, we could guess what the answer would be. We knew the Labour leader was going to be disappointed.

Sure enough, Kelly’s two sets of pleadings during Leaders’ Questions and again during Taoiseach’s Questions came to naught.

“Would you consider putting one Minister in charge of the most important thing in our country for the next 12 months?”

Not a chance because Micheál Martin has already set up a committee and no finer committee will you find this side of the known universe. It is the com-it-tee of all the talents, although it isn’t, because it’s a taskforce.

There really is no need for Alan to worry that the organisation and implementation of this crucial next step in Ireland’s fight against a global pandemic needs somebody with a voice at Cabinet to drive the response, somebody who will report to the Taoiseach and be accountable for the overall operation.

A Government Minister who will sit behind a sign which reads: “Covid-19 Vaccination Programme – The buck stops here.”

Imagine how that individual’s reputation would soar, how it would be burnished forever, if they managed this very difficult process with authority, confidence and speed. If they avoided political wrangling, averted cock-ups or quickly corrected them. Imagine.

But we will never know.

The Taoiseach says the Government will move quickly once the vaccines are approved.

“In this regard, I have established a cross-Government high-level taskforce to oversee the development and implementation of a programme for the roll-out of vaccines. And that’s being chaired, as you know, by Brian MacCraith from Dublin City University, ” he told Kelly.

Prof MacCraith is president of DCU. He was also recently appointed chairman of the Government’s Future of Media Commission. You know what they say: if you want to get something done, ask a busy person.

At this rate the in-demand physicist is going to become the new Kieran Mulvey.

Kelly has nothing against the very qualified people who have been appointed to this body, but he is worried.

“The word ‘taskforce’ fills me with concern.”

Perhaps that’s because he isn’t in government, where it’s very desirable to have a nice big buffer of taskforce proportions between a ministerial posterior and the blame for having to make potentially career-ruining decisions.

Oh now. There could be a big new job in this for some lucky junior Minister. Or maybe a backbencher could be plucked from obscurity and put in charge of the horrendously complex vaccination programme and it would be the making of them.

But no. Taoiseach Martin wasn’t biting. He remained welded to his team of all the talents. They represent a number of “work streams” and more “work streams” are to be developed if and when needed.

A lot of manpower is required and huge volumes are involved, he noted. Among the people already appointed to his cross-Government high-level group is Martin Shanahan, chief executive of IDA Ireland, who is a link into the broader pharmaceutical and multinational industry. Derek McCormack, an expert on cold chain logistics, is on the team as is Dalton Philips, chief executive of the Dublin Airport Authority (DAA). Obviously Paul Reid, the head of the HSE is on board, too.

Not only that, but the Defence Forces will provide some supports from a logistics perspective.

“A good team has been put in place in terms of the various work streams that need to be developed,” Kelly was assured.

But he’s holding out for a hero.

The others mentioned earlier are “very eminent people” all of whom will make “a huge contribution” however, he still has serious concerns about leaving the job of getting out the vaccines to committees and taskforces.

He urged the Taoiseach to reconsider. “Because logistics here is going to be massive. Rules around who is going to get what and when, is massive.” There are so many questions and problems which will crop up. And then there’s the legacy issues which will have to be politically managed too.

“Somebody should be at the Cabinet table dealing with this. The person who will say ‘I’m in charge. This is my role.’ They would be doing the State some serious service and they would report to you and the Cabinet.”

They’ve even done it over in the UK, he added. It’s one of the few things they got right about Covid policy despite being “miles behind us in anything they’ve ever done” since last March. “There needs to be somebody who is politically all over this.”

Anyway, it’s only for a year, wheedled Alan.

But Micheál loves his com-it-tee. There is a huge job of work ahead and a very “significant logistical undertaking” involved. Additional personnel may be added to the groups, although there is considerable experience in the Department of Health in the area of immunisation.

“Already, four significant streams of work have been established, covering the areas I have identified.”

“That said, I will reflect on what the deputy has said.”

The taskforce members know they will have to report back to him while the Government will draw on expertise from other departments and from the private sector.

“But your suggestion to put a Minister or Minister of State in charge of all that?” mused Micheál. His department is co-ordinating everything at the moment and that will continue.

“However, I will give consideration to what the deputy said.”

Get your expressions of interest in now!

There is just one, very big problem. How to choose the right person to fill this important role with so little time left to do it?

Actually, that’s no problem at all.

Just give the list to Helen McEntee and she’ll make the selection, all on her own, in a jiffy.