Miriam Lord: Some TDs could do with bibs as well as masks 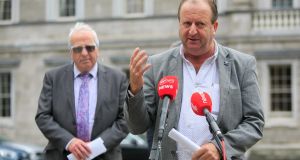 Under the circumstances, Mary Lou McDonald was probably the right person in the right place when two aerosols from Kerry began discharging indiscriminately directly behind her.

In fact, there were three aerosols. The other one from Cork.

Across the chamber floor, Róisín Shortall, co-leader of the Social Democrats, watched the unfolding horror. She may have been wearing a large face mask, but you can tell a lot from the furrowing of brows, narrowing of eyes and intensity of glare.

Róisín was not impressed.

Who could tell whether the aerosols flying around the Sinn Féin leader’s head were harmless or infectious?

The good doctors from NPHET, once they get over their mauling by Leo Varadkar, could do worse than monitor Mary Lou’s health very carefully in the coming weeks. She is a Covid-19 survivor – an early victim of the new pandemic who tells a sobering story about her encounter with the illness and overcoming its lengthy aftermath.

It’s six months since she contracted the virus. The science about length and lasting strength of post-Covid immunity is incomplete. In the Dáil chamber on Tuesday, trapped in a diffusion vortex, she presented the perfect case study.

When the fevered emissions from Michael Healy-Rae, Danny Healy-Rae and Michael Collins quickly escalated to dangerous levels, at least Mary Lou was wearing a mask. She will have been grateful for this when the TDs seated nearest to her – a full-throated trio from the Rural Independents Group –began howling at the top of their voices.

Danny doesn’t wear one because, as he recently explained, “it starts me into a fit of coughing.” His brother’s compliance with the Dáil chamber guidelines is fitful. Michael Collins is a fan of the clear plastic visor, although he tends toward the insouciant “display it on the ledge in front of you” look as opposed to the “wear it around your face the way you’re supposed to” fashion.

The outburst happened when Cork South-West TD Collins brought up a subject close to his heart: the service he organises, in conjunction with his two Kerry-based colleagues,to transport mostly elderly people to a clinic in Belfast so they can have life-changing cataract operations.

This is work that should not have to be done by local TDs, whether it be helping patients to complete the necessary paperwork or hiring buses to take them to the North for their treatment. The operations are funded by the State under an EU directive, but the people who need them are expected to arrange it for themselves.

TDs love to get references to their constituencies onto the Dáil record.

“In the next week and a half, I have men and women from Skibbereen, Durrus, Bandon, Baltimore, Ballineen, Carrigaline, Ballinlough, Ballyvolane, Dublin, Kinsale, Goleen, Midleton, Kealkill, Tipperary, Clonakilty, Dublin . . .”

Micheál Martin started to smirk, along with nearly everyone else in the chamber. Michael Collins was stung.

“It is not a laughing matter, Taoiseach. They are going blind on your watch.”

DHR agreed, from a couple of rows behind.

“No. It’s not a laughing matter,” agreed DHR, rowing in with his disgust.

But Micheál couldn’t wipe the grin off his face. It was the brazen recitation of constituency areas which set him off.

“That’s the second time you’ve laughed and people are not happy about it,” quivered Collins, disgracefully interrupted mid-tour.

The Taoiseach thanked his county colleague for his work in getting places for constituents on his bus to Belfast. He said a new facility is planned for Cork which will have the capacity to do 2,000 cataract operations a year.

Then he expressed a grudging appreciation of the service provided by Michael and the Healy-Rae brothers before slipping in that it has also served them well. “A game-changer for yourself, too, electorally . . .” is how he put it.

Michael Healy-Rae was ripping. He ripped off his mask and let rip. But the cap stayed on.

Danny, outraged, declared it an insult to the people who need operations.

The Taoiseach battled to be heard over the din. The air was thick with aerosol particles.

Mary Lou’s hand flew to her face, and her mask, unconsciously checking it was there. The three TDs around her were spitting mad.

Still smirking, Micheál calmed matters by winding them up even more.

“I was reliably informed that deputy Healy-Rae approached people outside mass to say, ‘I can get you on the bus if you want your cataract done.’ The woman concerned said- YOU SHOULD TAKE THAT BACK!”

Actually, she didn’t. That was an incandescent MHR, jumping in before the Taoiseach could finish his sentence.

“You’re a disgrace!” he bellowed, huffing sans mask in his seat above Mary Lou, while DHR loudly vented to his brother’s left and Michael Collins howled from right across the narrow aisle.

We never got to hear what the woman at the church gates said.

As all three erupted in a dizzying drizzle of droplets, we prayed for the efficacy of Mary Lou’s mask.

The decibel level went through the roof. “I never told you to sit down,” murmured Micheál, enjoying himself.

“The man to tell me sit down is the Ceann Comhairle and not you! ”

Micheál’s voice went up a Cork octave. “That’s the tru-ooth!”

It took a while, but they all calmed down when MHR took a phone call in the chamber.

So the Taoiseach reminded the maskless thunderers that the State paid for the operations in Belfast.

That set them off again. “Who said anything else,” harrumphed the frothing Healy-Raes, bawling like babies.

Maybe they should be issued with bibs as well as masks. Not that they’ll wear them.

“The Ceann Comhairle should consider reminding members of public health advice in respect of wearing masks .”

Good luck with that, Róisín.