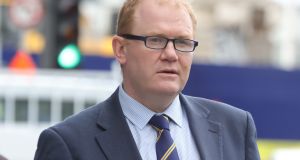 Senator Paudie Coffey at the Four Courts on Wednesday for the second day of his High Court action against Iconic Newspapers, publishers of the ‘Kilkenny People’. Photograph: Collins Courts

When Crotty the Robber stood on the gallows in Waterford city in 1742, he probably assumed his courtroom days were behind him.

And when Crotty, bloodthirsty leader of a band of cutthroat highwaymen, was hiding out in his cave in the Comeragh mountains, little did he know that his 18th-century criminal exploits would form a central part of a court case in Dublin almost three centuries later.

“This is not folklore,” said Paudie Coffey in the High Court on Tuesday, for the benefit of those of us just learning about William Crotty and his many misdeeds. “There was a man called Crotty the Robber.” He robbed and he murdered and he was hanged for his crimes, explained the Fine Gael Senator.

Coffey is suing Iconic Newspapers, the publisher of the Kilkenny People, for describing him as a robber and comparing him to the notorious highwayman in an article carried just weeks before the last general election. He was a minister of state in Enda Kenny’s government at the time, and lost his seat by a narrow margin.

He says that while he accepts his loss was due to a number of factors, the story “contributed in a huge way” to the result. It was about local authority boundary changes proposed for the Waterford/Kilkenny border, an “emotive” subject.

The piece quoted a press release sent to the newspaper by Coffey’s parliamentary party colleague, John Paul Phelan, who was unhappy about the prospect of parts of Kilkenny going into Waterford. Senator Coffey said its publication amounted “to a huge hatchet job done to me at the most vulnerable time in my political career”.

All human life is on show in the courts. You never know what you might hear. But nonetheless, it isn’t every day you hear a member of the Oireachtas telling a High Court jury that he accepts he wasn’t being compared to a cannibal or the bloodthirsty leader of a gang of robbers, but that he was “clearly likened to a known highwayman from Waterford”.

Such was the reputation of the aforementioned Crotty.

This was Coffey’s first day in the witness box and the second day of his defamation action against the Iconic Newspapers group.

The article in question carries wholesale verbatim quotes from the press release labelled “exclusive” and sent to the Kilkenny People by Phelan, who is now a Minister of State in Leo Varadkar’s Government.

In it, Phelan likens his party colleague to the highwayman, accusing him of “robbing chunks of south Kilkenny” through a boundary review. The newspaper story is headlined with one of Phelan’s phrases – “Coffey the Robber”.

Phelan also accuses Coffey, along with then minister for the environment, Labour’s Alan Kelly, of going into hiding in the manner of the Waterford highwayman, who had a hideaway cave in the Comeragh mountains.

Rossa Fanning SC, for the newspaper, asked the plaintiff if the Kilkenny People was actually suggesting that he too had been hiding in the foothills of the Comeraghs. Coffey replied: “No, but I come from the Comeragh area.”

Senator Coffey took to the stand first thing in the morning and remained there all day. He is back on Thursday.

From the outset, he was quite emotional as he told of his early family life and how he got into politics. He got upset when talking about his family and what it meant to him and apologised for this on a number of occasions. His father had been a county councillor and his mother was the district nurse and there was always a strong spirit of community service in the family.

Coffey’s cousin drew his attention to the offending article, having found out about it in an email from their mutual friend, former Irish rugby international Mick Galwey

“And then this happened.”

Coffey’s cousin drew his attention to the offending article, having found out about it in an email from their mutual friend, former Irish rugby international Mick Galwey. He had sent a photo of the article with the message: “Is this the best headline ever in the Kilkenny People this week. Class. Not, not even the Bomber will get ye out of this!!!!!!”

A number of sporting greats got mentions – the cyclist Sean Kelly (who launched Coffey’s first campaign), hurler Henry Shefflin (who held Paudie’s “first-born in his arms” at the Pilltown Show), rugby players Galwey, Liam Toland and Peter Clohessy, and an individual called “The Bomber”, who may or may not have been the great Kerry footballer Eoin Liston.

Choking back the tears, the witness described his shock at being labelled a robber. “I was never, ever a robber.” And he thought of the words of his dear mother: “If you scatter the feathers to the four winds, how are you ever going to collect them?”

The paper was dragging his name and his family’s name into the muck.

“It was pure lies. It was wrong.” He had nothing whatsoever to do with the boundary review.

“I’m fighting for my good name today. My good name!” he cried, holding up the article, welling up again as he stabbed the air with his index finger.

After the piece appeared, some young lads abused him at a hurling match. He couldn’t bring himself to attend the Pilltown Show. He was given a “non-welcome” when he canvassed Kilkenny councillors for Seanad votes, as their county had fared worst in the proposed boundary change. (It didn’t happen in the end.)

Worst of all was the incident which made him contact his solicitor nine months after publication. He was at the testimonial game in Thomond Park for the late Anthony Foley and he met Galwey, Toland and Clohessy.

When Enda Kenny offered him a Seanad seat as one of his nominees, he had to think hard before accepting it

“I was extremely embarrassed,” a choked-up Coffey told the court. “I thought, ‘when is this ever going to stop?’”

He didn’t accept that the rugby player didn’t take the article seriously and was only joking.

Coffey had gone from being an energetic, up-and-coming politician to feeling depressed with his head in the sand. When Enda Kenny offered him a Seanad seat as one of his nominees, he had to think hard before accepting it.

When Rossa Fanning showed him Phelan’s press release, Coffey said it was the first time he saw it. Under cross-examination, he agreed that it defamed him, but it was the newspaper which published it. “I’ve often released press releases to the media but I’ve never expected them to be published verbatim in an article.”

He didn’t agree that his real complaint is with deputy Phelan. He never considered suing him and never mentioned the article to him, although Phelan brought it up with him. He didn’t complain about him to the party chairman.

And while the senior counsel may have considered “Coffey the Robber” as a play on “Crotty the Robber”, he had a different view.