Miriam Lord’s week: McGuinness tribute not a time to wing it

Mediation for FG, getting TDs to put a sock in it, and how to beat MPs at their own game 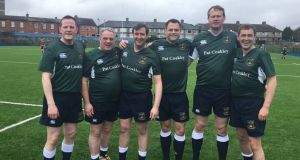 Lots of people with lots of stories this week about Martin McGuinness.

On Tuesday’s Six One News, Tommie Gorman, RTÉ’s man in Northern Ireland, delivered a most unique assessment of the man.

High on a grassy hill above Derry’s Bogside, as the light declined, news anchor Bryan Dobson asked Tommie for a final word on McGuinness. The mood was sombre and reflective.

“For all the complexities, Martin McGuinness was a man of simple taste,” began the veteran journalist, recalling for viewers a conversation in the 1980s when he asked the then IRA commander – an intimidating figure at the time – if he knew a man called McGuinness who played football for Sligo Rovers.

And this is what that the gunman turned peacemaker said to Gorman: “I didn’t know him, I knew his father. He made a feed of pigeon for us one time when we were on the run and we were almost starving at the time.”

Over 30 years on, those profound words still resonate with the newsman.

A sad looking Tommie solemnly pronounced for Dobbo, the Irish nation and grieving Republicans: “That was Martin McGuinness, a man of very simple taste, who ate pigeon in his time.”

“And there we leave it,” said Bryan, wrapping things up for the evening.

There was nothing more to say.

Ministers on the fly

Minister of State John Halligan found himself in Brazil as part of the great St Patrick’s Day ministerial airlift.

While he was there, he met Fr Pat Clarke, the Dublin-born priest who has devoted his life to helping the poor families and street children who live in the favelas of Sao Paolo.

The Waterford TD, along with Ireland’s ambassador to Brazil Brian Glynn, visited the Holy Ghost father in his simple church where he told them about his work. They brought good quality footballs with them for the street children, who love to play soccer but seldom see a decent football.

I spoke about justice, fair play and the great work that the Catholic priests and nuns have been doing here for decades

Fr Clarke said local politicians have never visited his church, which caters for people who live in abject poverty. No cardinals or bishops have ever come calling either.

He invited Halligan, an atheist, to speak from the pulpit during midday Mass. “I spoke about justice, fair play and the great work that the Catholic priests and nuns have been doing here for decades, standing up for these people who have no voice,” he says. Halligan is now planning a major fundraiser for Fr Clarke.

Another independent TD who was on his travels during the St Patrick’s period was Tipperary’s Mattie McGrath, who popped up unexpectedly in Washington DC at ambassador Anne Anderson’s reception for the Taoiseach and then surfaced in Fitzpatrick’s Hotel in Manhattan on St Patrick’s Day.

His trip to America (from Monday to Saturday) was funded by the anti-abortion organisation, Family & Life, and he went as part of a delegation which included the DUP MP Ian Paisley jnr and his MLA colleague Paul Givan.

Mattie, who travelled with his wife Margaret, found time to do some Irish step-dancing in the Dubliner Hotel

McGrath says that during their two days on Capitol Hill they were lobbying senators and Congress members “on the undocumented Irish and on life issues”.

He said the group also visited the “pro-life” Heritage Foundation, a leading conservative think-tank. Mattie, who travelled with his wife Margaret, found time to do some Irish step-dancing in the Dubliner Hotel at the St Patrick’s Day reception held by Paul Ryan, speaker of the House.

The delegation then moved on to New York and McGrath marched in the parade with the Tipperary contingent.

The Mediation Bill is wending its way through the Oireachtas. Its aim is to promote mediation as a effective and efficient alternative to court proceedings thereby reducing legal costs, speeding up the resolution of disputes and relieving the stress involved in court proceedings.

On Wednesday night, Fianna Fáil’s justice spokesman Jim O’Callaghan told the Dáil that his party was supporting it.

Given his previous line of work, senior counsel O’Callaghan is familiar with the whole business of mediation.

It can useful in many situations.

“I’m sure it can also be used in politics. There are some problems in politics which appear intractable, that parties find difficult to resolve. They can be resolved through the intervention of a mediator.

“I note that at the talks between Fine Gael and ourselves, we didn’t go for the option of having a mediator there to chair the talks or to organise the discussion but it did happen, I understand, in respect of Fine Gael and discussions with the other parties.

So any intractable political problem that exists – and I know it’s not dealt with by this legislation – can also benefit from the intervention of a mediator or mediation.”

The deputy for Dublin Bay South had a particular issue in mind. He outlined it to Fine Gael’s Minister of State for Justice, David Stanton.

“We have a party at present which has an intractable dispute in terms of trying to organise the replacement of their leader. There are a couple of younger politicians trying to remove an older leader. Perhaps that might benefit . . .”

Stanton was all ears. “Oh, is Micheál Martin leaving?” he asked.

O’Callaghan carried on, indicating the problem being experienced by this unnamed party might benefit from “the intervention of mediation”. Others might be prepared to pitch in. Would his FF colleague and acting chair John Lahart consider the job?

“Maybe you could sit in as a mediator, try and hear what the two young, aspiring politicians have to say and listen to the old, experienced man, the person who is leading the party, and then you might come up with a report. It would probably take about six months or so.”

Lahart didn’t turn down the offer.

Mediation, though, might not be the way to go.

“I’m told that is beyond the scope of this Bill,” he informed O’Callaghan. “But as a psychotherapist, I might be able to offer better skills than mediation.”

The way things are going in Fine Gael, it might well come to that.

Some serious mediation might be needed next week when there might be some very important noses out of joint at Leaders’ Questions.

The Dáil’s Business Committee has decided to take action on long-winded contributions.

It seems the main culprits are the Taoiseach and the leader of Fianna Fáil, with Sinn Féin’s Gerry Adams – and occasionally Mary Lou McDonald – running a close third.

Each leaders’ slot is supposed to last for eight minutes: three minutes each for opening question and reply, and a minute to follow up and for the reply. That rarely happens.

So on Thursday, at the urging of the Independent Alliance’s Boxer Moran, independent Mattie McGrath and Mick Barry of Solidarity (the Anti-Austerity Alliance), it was decided to give the wafflers a warning after they pass the time limit and then, if they are still talking after about 20 seconds, their microphones will be cut off.

The put-upon Ceann Comhairle, who struggles to enforce the rule, is apparently all for the move.

The result should be highly entertaining.

Times they are a-changing

When they aren’t watching the clock, Fine Gael’s two MEPs for Ireland South appear to be watching each other.

On Wednesday, Deirdre Clune issued a thrilling press release entitled “Clocks go forward – but is it a backward step?”

Clune says she first raised the issue of tinkering with our timepieces back in October “when she described the clocks going backwards as a relic from a bygone era that no longer serves a useful purpose”.

Now the European Commission has told her it is investigating the annual clocks change and will be carrying out an analysis of the impact of the current arrangements in the member states.

The Cork-based MEP wants us to be open to the idea of getting rid of the bi-annual time adjustment and, at the very least, hold a debate here on the issue.

She was, by the way, “speaking as Ireland gets set to spring into summertime”.

While Deirdre got in first with her clock-related plea, Kerryman Kelly tried to go one better by declaring he is “Ireland’s only member of a group of MEPs campaigning for the bi-annual clock change”.

The group is “concerned by the serious health and safety concerns that this change of time presents to citizens. Various studies prove that going against the natural rhythm has a detrimental impact on sleep and overall health, leading to weakened immunity, increased anxiety and depression in some cases”.

Perhaps Sean, in his own good time, should invite her to join.

There was another big win on the home front last Saturday when the Dáil and Seanad rugby team continued their unbeaten run by seeing off a strong Commons and Lords side in their pre-big match encounter at Donnybrook.

The Irish politicians were very slow off the blocks and the visitors raced to a 10-0 lead through a pair of tries by Paul Farrelly, Labour MP for Newcastle-under-Lyme.

Fianna Fáil Senator and flying winger Mark Daly pulled one back for the home side but a further two tries for the visitors saw the Irish trailing by 20-7 at the interval. One of those scores came from Conservative Mark Pawsey, who is the actual MP for Rugby.

After Fianna Fáil Senator and team coach Gerry Horkan administered a half-time earbashing to the troops, they took to the pitch with renewed vigour. Sinn Féin’s Aengus Ó Snodaigh, aka the Ballyfermot Bruiser, put in a series of crunching tackles leading to three quick tries.

Big No 8 Jim O’Callaghan was very prominent in the loose, keen to impress a visiting delegation of former teammates from his Cambridge days.

Senator Neale Richmond, sneaking over from a yard out, bagged the final try

Senator Neale Richmond, sneaking over from a yard out, bagged the final try.

A nice 31-20 win in the end, with Wexford TD Michael D’Arcy impressively slotting three tough sideline conversions. He pulled a hamstring in the process and limped his way around Leinster House all week.

The post-match pleasantries took place in Old Wesley’s clubhouse, where super-supporter Senator Catherine Noone was presented with a souvenir Commons and Lords RFC bow tie. As ever, a sizeable sum was raised for the IRUPA injured player’s fund.

1 Open Ireland as soon as possible - Tourism chief warns of 'catastrophic' impact of pandemic
2 Bobby Storey: The IRA's planner and enforcer who stayed in the shadows
3 Full line up of junior ministers unveiled as Taoiseach accused by one TD of snub
4 Trump says Covid-19 will disappear after US reports record increase
5 Who are the new junior ministers? All their profiles are here
Real news has value SUBSCRIBE