Warm applause for Arlene Foster at funeral of McGuinness

Taoiseach, President and former US president Bill Clinton among 25,000 in attendance 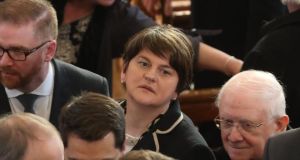 An estimated 25,000 people attended the funeral of Martin McGuinness, according to Derry City and Strabane District Council.

Among the high-profile dignitaries who came to pay their respects to the former IRA leader who acted as Sinn Féin chief negotiator in the peace process were former US president Bill Clinton, President Michael D Higgins, Taoiseach Enda Kenny, and, representing the British government, Northern Secretary James Brokenshire.

There had been speculation over whether former first minister, the DUP’s Arlene Foster, would attend, and mourners rewarded her presence with a round of applause as she entered St Columba’s Church, Long Tower, for the Requiem Mass. She was accompanied by her DUP colleague and fellow former first minister, Peter Robinson, and by the DUP MLA and former minister Simon Hamilton.

Chief among the mourners were Mr McGuinness’s wife Bernie and his children Gráinne, Fionnuala, Fiachra and Emmet, as well as the wider family circle and friends and neighbours.

The readings were given by Mr McGuinness’s nephew Odhran and his son-in-law Seán Hargan. His grandchildren Tiarnan Hargan, Rossa Devine, Oisín Hargan and Ciana Devine led the prayers of the faithful.

The Nobel Laureate and former leader of the SDLP John Hume came to pay his respects, as did SDLP leader Colum Eastwood and MLA Mark H Durkan.

Countless Sinn Féin activists and republican ex-prisoners attended, including Bobby Storey, Séanna Walsh and Seán “Spike” Murray, as did many relatives of those killed on Bloody Sunday.

PSNI Chief Constable George Hamilton was also present, as was Northern Ireland’s former justice minister the Independent Unionist MLA Claire Sugden, and the president of Co-Operation Ireland Peter Sheridan, who was once the RUC’s most senior Catholic police officers.

Former British prime minister Tony Blair had been expected to attend, but it is understood he was unable to travel to the funeral because of the terror attack in London on Wednesday.

Requiem Mass was presided over by Fr Michael Canny, and was concelebrated by the Bishop of Derry Donal McKeown, and a number of priests from the diocese of Derry and beyond.

The Primate of All Ireland, Archbishop Eamon Martin, was unable to attend, but sent his condolences to Mr McGuinness’s family.

Prayers were also read by the former president of the Methodist Church in Ireland, the Rev Harold Good, and by the Rev David Latimer of First Derry Presbyterian Church.

At the graveside folk singer Christy Moore sang a final song, The Time Has Come.