Former US president tells politicians ‘to celebrate his life . . . you have to finish his work’ 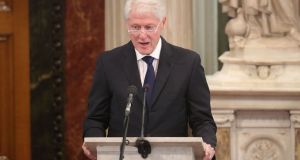 Former US president Bill Clinton urged politicians in Northern Ireland to “finish the work” of Martin McGuinness and get devolution back up and running in a warm and carefully pitched speech at his funeral in Derry yesterday.

“If you really came here to celebrate his life and honour his contribution to the last chapter of it you have to finish his work,” Mr Clinton said.

An estimated 25,000 people gathered in Mr McGuinness’s native Bogside to pay their final respects as his Tricolour-draped coffin was carried from his family home on Westland Terrace to St Columba’s Church in the Long Tower, and later to the City Cemetery.

Among the many dignitaries at the funeral were Mr Clinton, who arrived with former taoiseach Bertie Ahern, President Michael D Higgins, Taoiseach Enda Kenny and Northern Secretary James Brokenshire.

In what was viewed as a positive move as talks continue to try to restore Stormont, also present were DUP leader and former first minister Arlene Foster and her predecessor Peter Robinson.

The absence of paramilitary trappings or heavy symbolic references to Mr McGuinness’s IRA past helped to facilitate their presence.

Mr Clinton commended Ms Foster for attending, turning to her as he said: “I know and most people in this church know that your life has been marked in painful ways by the Troubles. And I believe the only way a lasting peace can take over and endure is when those who have legitimate griefs on both sides embrace the future together.”

Mr McGuinness was buried in the republican plot at the cemetery overlooking Derry, where his friend of 45 years Gerry Adams delivered the graveside oration.

Mr Adams paid tribute to Mr McGuinness and to the chief mourners – his wife Bernie, children Gráinne, Fionnuala, Fiachra and Emmet, and grandchildren.

Mr Adams said Mr McGuinness was born into an “Orange state which did not want him or his kind”. He said that state’s “violent suppression” of civil rights and “the emerging conflict propelled Martin into a life less ordinary”.

“Martin believed in freedom and equality. He resisted by armed actions those who withheld these rights, and then he helped shape conditions in which it was possible to advocate for these entitlements by unarmed strategies,” said Mr Adams.

“Throughout it all, Martin remained committed to the same ideals that led to his becoming a republican activist in the first instance – the pursuit of Irish unification, freedom, respect, equality and respect for all.”