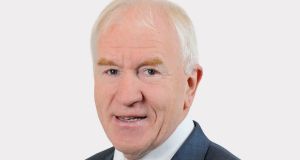 Jimmy Deenihan, who is retiring from politics: “I will continue to work for the people of Kerry for the rest of my life”

Former Fine Gael TD for Kerry North and for Kerry North-West Limerick Jimmy Deenihan is bowing out of politics and will not run in the next election.

After 33 years in politics it was time to reinvigorate the party in north Kerry, develop new energy and get new people into the party, Mr Deenihan said. He was now going to work for the people of Kerry in a different capacity, the 64-year-old said announcing his departure from politics.

His commitment to Kerry went back to 1970 when he was a Kerry senior footballer, he added. “I will not be running in the next general election, but I will continue to work for the people of Kerry for the rest of my life,” he told Radio Kerry this morning.

Minister for Education and Skills Richard Bruton, who was was attending a teachers’ conference in Killarney, said the news had come as a surprise to him.

“He is a very unique politician. He was a great colleague in Government. We will certainly miss him. Jimmy loved politics, and it was like a death in the family when he lost his seat,” Mr Bruton said.

Among his achievements, Mr Deenihan listed Tralee bypass, the new school at Blennerville and the revamping of Killarney House. Mr Deenihan was minister for arts, heritage and the Gaeltacht and a minister of State for the diaspora

He lost his seat for Kerry North-West Limerick in last year’s general election when Kerry became a single constituency. The loss of his seat came as a great shock and in an interview afterwards he said he did not expect to lose.

He attributed his loss to three factors, including the “Healy-Rae tsunami” as he liked to describe the south Kerry onslaught. Magnanimously, he says the two Healy-Rae brothers being elected was a historic, outstanding performance. Some of his own party had been unfair to him, he also said at the time.

When he entered politics at the age of 30, it was the late John B Keane who proposed him. Keane, who canvassed for Jimmy all his life, including even three days before he died, warned the young man that in politics “your own will be the worst”, Mr Deenihan said.

On Radio Kerry this morning he said he had been totally committed to politics – perhaps too committed, some would say.

A former teacher, he was nominated to the Senate by Garret FitzGerald. He is married to Mary Dowling from Tralee. The couple have no children.

Mr Deenihan is now chairman of Kerry Recreation & Sports Partnership, a body set up to encourage sport in the county.