A family, party, movement and city are united in mourning on a day of significance 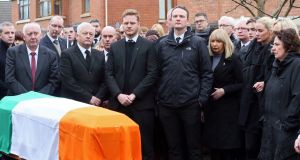 An Irish flag is placed upon the coffin as sons Emmet (centre left) and Fiachra (centre right), wife Bernadette (Bernie, far right) look on ahead of the funeral of Martin McGuinness outside his home in the Derry. Photograph: Paul Faith/PA Wire 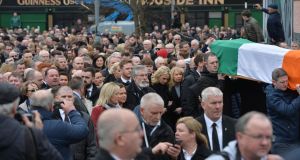 The coffin of the late Martin McGuinness is carried through the streets of Derry. Photograph: Alan Betson

At the centre of it all was family in mourning. But that wasn’t all.

“Republicans are mourning too,” said a Sinn Féin official in the party’s bustling Derry headquarters.

They poured into the city from early morning. A steady stream of people queued to sign the book of condolences in the Bogside office, its pages filling so quickly that long messages were abandoned as a space saving exercise in favour of just names and addresses.

Coaches decanted cumann members onto the steep hill near Martin McGuinness’s home, from where he would soon be carried to church on the shoulders of his comrades. Men and women, they all wore black.

In the hours leading up to the funeral, scores of stewards took up position along the route to his house and then to St Columba’s. They directed traffic. They diverted traffic. They told members of the public where they could and could not stand. Many wore earpieces and carried two way radios.

Media passes were issued on lanyards – two different kinds granting degrees of access. Later, at the doors of the church, women smartly dressed in black with clipboards in their hands and Easter lilies on their lapels checked off mourners against their attendance lists.

The man from the Catholic Press Office was effectively rendered redundant.

Yesterday Sinn Féin thoroughly owned this side of the city.

Tens of thousands of people thronged the streets while major VIPs – including President Michael D Higgins, Taoiseach Enda Kenny and former US president Bill Clinton – arrived in town. But for the entire morning and into the late afternoon when the funeral procession crossed to the City Cemetery in the Creggan, not one policeman or woman did we see.

There was much talk of “the trappings”. Would there be any? A paramilitary-style march past? Honours rendered? A volley of shots over the coffin?

But, as had been promised, nothing like this happened. The nearest thing was the slightly serried ranks of TDs and Senators, MLAs and MEPs who mustered for pall-bearing and guard of honour duties.

Politicians on parade. The battle is on a new front now.

The only Sinn Féin representative left back in Leinster House was Waterford TD, David Cullinane, who had to attend a committee.

To some observers, this ostentatious display of normality was seen as another declaration that the war really is over. That Sinn Féin and the republican movement now feel confident enough to bury a much revered and respected leader without resorting to the sort of theatre which would have been expected in the past.

Instead, there were little things, like the handshake in the church between Sinn Féin’s Michelle O’Neill and the DUP’s Arlene Foster – a small but hugely significant gesture. Or like when Foster left after the requiem mass with her predecessor Peter Robinson and a group of republican mourners along the railings broke into spontaneous applause.

In his graveyard oration, Gerry Adams followed the tone set by Clinton and others at the funeral service by speaking of a shared and equal future between two communities.

He appealed to nationalists “do nothing to disrespect our unionist neighbours or anyone else”.

This was the third funeral of the day in St Columba’s.

The incense was already heavy in the air when the old church received the remains of Martin McGuinness.

All funerals are sad. But the first one hit local hearts hard. League of Ireland player Ryan McBride, the 27-year-old captain of the Derry City football team, died suddenly on Sunday.

The theme of reconciliation and reaching out began here. “It was a lovely mass. Everyone was so gutted to hear about Ryan. There was no animosity or rivalry. I saw Rovers and Bohs fans sitting together there today, I swear to God,” said an FAI official from Dublin.

The final funeral was the biggest. The city came to a standstill for Martin McGuinness. In death, as for much of his life, he made headlines around the globe.

But in the middle, at midday, was “an ordinary parishioner”, as the bishop put it during a lull between masses. “And that family is grieving too.”

“Families are at the centre of all this,” noted Donal McKeown, the Bishop of Derry, “and they are the first people to be talked about.”

McGuinness’s family waked him in the house off Westland Street as the gathering crowd grew on the road and waited to march with Martin on his final journey. Soon, the area behind the start of the procession was jam packed with people and the footpaths on either side of the route filled up right the way down to Free Derry Corner.

Tricolours flew from upstairs windows and the graffiti on the boarded up buildings and wooden hoardings had all been painted out in grey.

A huge outdoor screen was set up in front of the Free Derry Wall, one of the most famous gable ends in the world. It was going to show a live stream of the funeral mass, and until then, it featured a picture of a smiling McGuinness and a digital clock counting down the minutes and seconds to the church service.

There, surrounded by murals of scenes from Derry’s troubled past – Bernadette Devlin, shouting into a megaphone while Bogside women bang dustbin lids; Fr Edward Daly waving a bloodied white handkerchief as he helps bring a dying man through the Bloody Sunday chaos – the locals watched the VIPs arrive and then listened to the mass.

Outside, all the way down the hill, past the mural of Bobby Sands and Nelson Mandela, around the rundown Bogside Inn to Free Derry Corner and then back again in the other direction, the crowd flowed behind the funeral party.

Looking up from the bottom of the hill, the scene was amazing. As the coffin, covered in the tricolour moved slowly down the street, the space left behind was immediately filled. Outside the house, members of the McGuinness family were first to shoulder the coffin and carry it a short way. Then they handed over to a bearer party which included Gerry Adams, Mary Lou McDonald and Michelle O’Neill.

“I never thought I would be giving this oration today,” said Adams, a few hours later in the bitterly cold cemetery.

Crowds watched from the ancient city walls. A hearse led the way, but it never got to transport any coffin. There were more than enough willing hands to take it all the way.

Outside the church, photographers gathered on a riser, waiting for their moment. It came when the coffin moved past a sign on a lamppost reading “IRA” with a silhouette of a gunman underneath.

The political big hitters were already inside. Bill Clinton got a round of applause when he arrived. He would later speak of “the amazing unfolding of Martin McGuinness’s life . . .”

Clinton is a gifted speaker. He had people laughing and sighing and wiping away the tears in the course of a few sentences.

The young and old – gunman to statesman – both the same, according to Adams. Others wouldn’t agree.

After the mass, Bill Clinton was mobbed by well-wishers.

But one local woman wasn’t impressed.

“I tried to get in there today. Some Shinner told me I wasn’t getting let in. Typical. No room for the ordinary people. Martin wouldn’t have stood for that. Same thing happened after Bloody Sunday; there was that many dignitaries we stood in the rain.”

She would have complained to Martin. “I can’t do that now.”