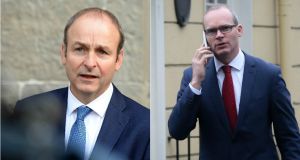 All this talk of building walls and restoring barriers and pulling up drawbridges is very unsettling.

Why can’t we all just get along?

Like they do in Cork South Central, home of some heavyweight political hitters. The sitting TDs comprise one aspiring taoiseach (Micheál Martin, Fianna Fáil), two aspiring leaders (Simon Coveney, Fine Gael and Michael McGrath, Fianna Fáil) and a young rising star (Donnchadh Ó Laoghaire, Sinn Féin). They must spend a lot of their time looking over their shoulders at each other.

The two biggest names in the constituency are Fianna Fáil leader Martin and Coveney, Minister for Housing and one the favourites to succeed Enda Kenny at the helm of Fine Gael. They end up attending a lot of the same functions around Cork, probably more pleased to see each other than their main party rivals. Michael McGrath, Fianna Fáil finance spokesman, topped the poll just ahead of his boss last year while Coveney’s colleague, former TD now Senator, Jerry Buttimer, is aching to get back to the Dáil.

Just before Christmas, Micheál and Simon found themselves yet again sharing the top table at a local function. This time, it was a charity auction in the Radisson Blu Hotel in aid of Marymount Hospice.

This annual event is always very well supported and comedian Barry Murphy, who was auctioneer for the night, kept the pledges coming. However, when he had sold off all the lots, Murphy said the fundraiser was still a few bob short of its target figure. Could anyone think of a few more items for auction?

Various football jerseys were put up and more bids came in, but the money raised stopped just short of the hoped-for final figure.

Then Micheál Martin had a sudden rush of blood to the head. “Dinner for four in Leinster House with me and Simon,” he shouted. “Oooh!” gasped the crowd, and a rather surprised Coveney, who was at the same table.

A fierce bidding war erupted and entrepreneurs Linda and Dan Kiely, who run the hugely successful outsourcing company Voxpro (they employ more than 1,000 people in Dublin, Cork and California and have big expansion plans for this year) closed the deal with a decisive € 2,500 offer.

Marymount Hospice reached its target and Coveney declared he was more than happy to co-host dinner with his constituency rival.

A date has yet to be set for what should be one of the highlights of the Oireachtas social calendar. Or it would be, if there was such a thing.

If tickets could be sold for the adjoining tables, Marymount Hospice would do ever better out of the wheeze.

O’Callaghan in search of award

The deputy for Dublin Bay South gave the Ceann Comhairle a plaintive look.

“I don’t know if you give out awards to TDs for hard work and long hours, but if you do, I would like to nominate Deputy O’Brien and myself as we started our public duties in Leinster House this morning at 9 o’clock before the justice committee, and, some 13 hours later, we’re still going. So you may consider that nomination.”

Seán Ó Fearghaíl, a veteran of long nights in the chamber before and after he assumed the chair, smiled at the first-time TD.

“It wasn’t like that in the Law Library, I take it.”

But much better paid.

And on the same subject, Stanton remarked, “it reminds me of a deputy here years ago who came in looking for overtime sheets.”

McGrath and Halligan eye up Cuba

Our over-excited informant was a little wide of the mark this week, but it’s true that junior ministers McGrath and Halligan have been fighting a private little war over which of them gets to go on the plum trip to Cuba next month with Michael D.

They were the only two government politicians to publicly back Michael D Higgins after his much criticised rose-tinted tribute to Fidel Castro when he died in November. McGrath, who is a big boy now and sits in a high chair at the Cabinet table as a “super junior”, voiced his disappointment to fellow Minsters when the government decided not to send a representative.

It looked like his chance to return to the island – he’s been there twice before – was not going to happen.

However, news of an impending Michael D trip to Latin American did the rounds in the new year and old socialists McGrath and Halligan immediately began lobbying for a seat on the plane.

Minister for Foreign Affairs Charlie Flanagan doesn’t have the time to go swanning off Cuba, Colombia and Peru.

Foreign Affairs is usually a handy enough portfolio – lots of dinners and foreign travel and little scrutiny. But between Brexit, Trumplethinskin, Teasie May and Arlene, he’s up to his oxters.

So it’ll be a Minister of State accompanying the President in February. Some in government circles have been wondering if it might be possible to send the two Independent Alliance juniors away on the trip.

A few weeks of not having to listen to the pair of them wrestling with their consciences would be a lovely break.

Like the man who famously stopped him “with two pints in his hand” (something Donald Trump could never do with his stubby digits) and a readymade anecdote to illustrate the need for the water charges.

It happened to Enda only recently on a visit to Switzerland. Global business kingpins with two flutes in their hands (possibly brimming with Bollinger) approaching him to say how fantastic Ireland’s data protection regulation is and saying they simply had to tell him what a great job our regulator is doing.

Serendipitously, Enda is only back in the country a few days when he has the honour of performing the official opening of the new offices of the Data Protection Commission.

“I came back from Davos last week having spoken to quite a number of international companies,” the Taoiseach told the commissioner Helen Dixon and her team, “and I want to say to you that – to compliment you – the Irish regulator . . . has a very high reputation in the way you deal with business...”

Enda said they are doing a great job for the country.

“It was brought to my attention by chief executives of several very major and international global companies and that’s the kind of reaction I got . . .”

It reports that a senior Trump aide is going to work for Teneo, the New York-based global PR consultancy firm run by Declan Kelly (DKNY), the Tipperary man who became a key Clinton fundraiser and close associate and was appointed economic envoy to Northern Ireland by Hillary Clinton in 2009. DKNY is the brother of AK47, the former Labour minister, Alan Kelly.

There was shock in the fledgling Trump administration when Jason Miller suddenly quit before Christmas as communications director amid widely reported allegations of an affair with a fellow member of the White House transition staff.

He was replaced by the instantly infamous Sean Spicer. Spoofer Spicer – or Spoocer for short – astonished viewers of his first media briefing by bullishly disputing clear photographic evidence of the crowd size at Trump’s inauguration.

Miller joins Teneo Strategy next week and will be “advising Fortune 500 CEOs on crisis communications, corporate communications and media relations”.

The way things are going in the White House, Spoocer mightn’t be far behind him.

The report notes: “Teneo, which made its name thanks to its close relationship to Bill Clinton, is clearly adapting for a Trump-run world.”

That’s business for ya.