Presidential hopefuls set out their stalls in Waterford 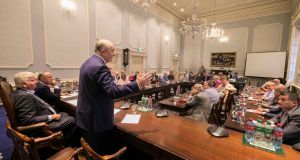 Waterford City and County Council has become the first local authority in the country to hear pitches from prospective presidential election candidates, but is unlikely to decide on a nomination until September.

The council will now wait until after the ministerial order for the presidential election is made, probably in September, until it decides to nominate anyone, or not.

“I know,” she told councillors, officials and a large gathering of media personnel, “that the role of the president is above policy-making, but it’s not above the role of principle.”

She will create a national assembly for the wellbeing of the country in her first six months in office, if elected, Ms Freeman said, and appoint “key members in this discourse” as members of the Council of State. “We all know there’s no greater power than the power of the spoken word.”

The Independent candidate, who founded the suicide crisis charity Pieta House, spoke of the success of the annual Darkness Into Light initiative, which grew from a charity walk in the Phoenix Park in Dublin into a movement which saw 200,000 people across the country walk to raise funds for Pieta House and raise awareness of its work.

The president cannot tell the taoiseach what to do, but she can speak when something is wrong in Irish society

“In this country, some people are more equal than others,” she said, adding that “officialdom” has shown little respect to many vulnerable people such as the women affected by the cervical test scandal, families living in homelessness and mothers who had their children sold into adoption.

“The president cannot tell the taoiseach what to do, but she can speak when something is fundamentally wrong in Irish society. She can say the Irish people are disgusted with the scandals that have brought shame onto the country.”

Ms Freeman was asked by Fianna Fáil councillor Adam Wyse if, as a “No” voter in the recent abortion referendum, she would sign the resultant legislation into law, and said that while she did vote No, she would “absolutely respect the vote” of the people and sign the act into law. “I voted No, but I didn’t vote No for religious reasons, I voted No because I spend all my adult life trying to conserve life.”

Businessman and Dragons’ Den television star Gavin Duffy told the meeting that recent opinion polls showed that the people want a presidential election. He said he has been “an advocate against ageism” for years and he had “no difficulty” with President Michael D Higgins going forward for the position again. “What I do believe is that, if he’s successful, he should return to the Áras with a mandate.”

His “vision for the presidency” is to represent the people of Ireland and be their voice at home and abroad, Mr Duffy said. “I want to inspire us to bring out the best in all of us to achieve our potential.”

Mr Duffy’s membership of the Ward Union Hunt in Co Meath has been under scrutiny lately and he addressed this issue by saying that, while he doesn’t himself hunt with the Ward Union Hunt, he “stepped into the breach” when there were moves some year ago to have it banned.

“The Ward Union Hunt are the keepers of the indigenous red deer here in Ireland.”

In response to questions from Cllr Eamon Quinlan (FF) on any relationship or otherwise with Nama developers or Anglo Irish Bank, he said: “I can absolutely assuredly say I have never advised a Nama developer in any type of way in terms of press relations.”

There was a “photograph” and a two-page story in a newspaper some time ago relating to a meeting with Seán FitzPatrick, but anything further “never happened”, he said.

Asked how confident he is of winning the election, he said there is a “popular incumbent President” and it will be a challenge for any other candidate. “I wouldn’t be doing it, risking the amount of finance that I’m risking, if I didn’t believe in my heart of hearts that I can do it . . . I’m confident that I can win this election.”

Later, Mr Duffy told reporters he would be “different than Trump” if elected president. “I am not an admirer of Donald Trump as president and I am less an admirer of him as a businessman.”

Retired Aer Lingus employee Patrick Feeney, from Galway, who secured 22 votes when he ran in the 2016 general election as an Independent, said he wants to be “the innovation president of Ireland” and wants a nomination for the presidential election “as a challenge for democracy against what’s going on at the moment around politics”.