Miriam Lord: Outbreak of solidarity as Dáil votes to do right thing on coronavirus

Few TDs in chamber as social distancing rules apply, but sense of foreboding in the air 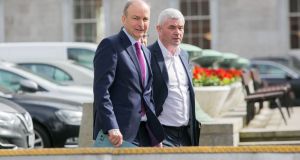 On an abnormal Thursday in Leinster House, Dáil Éireann succumbed to an infectious outbreak of solidarity brought on by an overwhelming desire to do the right thing.

It was later traced to a rare strain of cross-party contamination which developed after TDs were exposed to the frightening truth about the Covid-19 virus and its devastating consequences for the country.

This didn’t stop them drilling into the emergency legislation the Government is rushing through to deal with the crisis. There was tough questioning of health minister Simon Harris before the measures were agreed.

The unique sitting was held under the temporary rules of “social distancing”, whereby fewer deputies were required in the chamber and there were mandatory sanitary gaps on the benches between each of them.

It was supposed to last no more than three hours, after which they would all be taken to the vacant Seanad chamber to be thoroughly hosed down and swabbed.

In the final event, it took them twice as long to finish considering the snappily titled “Health (Preservation and Protection and other Emergency Measures in the Public Interest) Bill 2020. After a 2pm start, they wrapped up 6½ hours later.

Now the action moves to the Upper House on Friday for the last hurrah of the 25th Seanad and a rubber-stamping of the new laws.

The Ceann Comhairle arrived dressed for business. When Seán Ó Fearghaíl took up the old framed prayer and stood to read it at the start of proceedings, he was wearing latex gloves. There are times, during less collegiate sessions, when he might be glad of a Hazmat suit when certain deputies in his vicinity begin foaming and spitting with anger.

He abandoned them midway through the sitting, probably because the medical experts say gloves are more of a hindrance than a help to people trying to protect themselves from viral contamination.

On any ordinary day, yawning gaps between the TDs on the benches are not an usual sight

Ó Fearghaíl was the first of many to stress to people that this too will pass. Perhaps the constant repetition of this comforting reminder – it will pass – had a subliminal effect on the population, leading to last week’s astonishing nationwide scenes of the panic-buying of toilet rolls.

He was also the first to caution that things will get worse before they get better. This “cruel and capricious” disease will pass, he said, but “not before it has scarred our nation and hurt many people”.

For viewers watching outside the Dáil, the broadcast images of the chamber will not have given a true picture of the scene. On any ordinary day, yawning gaps between the TDs on the benches are not an usual sight. Neither could they see the sense of urgency and forboding in the air.

Both on the floor of the House and above in the press gallery, a strict seating arrangement applied. Media seats were labelled, with two empty places between each journalist. Below, the same configuration applied in most cases, although some had to brave just one empty berth between them and possible carrier colleagues.

The Taoiseach’s usual billet had a nameplate on the desk: “Fine Gael 1”.

Opposite him, in his usual spot, Micheál Martin. “Fianna Fáil 1”.

And in Mary Lou McDonald’s place (she’ll move across to take over Micheál’s Leader of the Opposition place soon if the talks between Fianna Fáil and Fine Gael go as expected) it said “Sinn Féin 1”.

It reminded us of Air Force One and was strangely exciting.

Soc Dems co-leader Catherine Murphy had the honour of sitting behind “Social Democrats 1”, which must have thrilled her colleague Roisín Shortall when she saw it on the screen.

Through the sitting, all the TDs strictly observed the social distancing requirements. There was nobody in the public gallery.

Eamon did his best to test the effectiveness of the gap during his contribution while decrying the behaviour of drinkers who were videoed in a packed Dublin pub singing with abandon.

The video was taken at “the Temple of the Bars where a good time crew was singing Sweet Caroline”, said Eamon. He paused and collected himself before launching into a bit of the chorus.

“Hands holding hands... touching me, touching you!” Disappointingly speaking rather than singing, he held his arms wide as he interpreted the words, looking like a TV evangelist channelling the rapture.

Labour’s Alan Kelly, who was sitting nearest to him and must have thought he was at a safe social distance, looked up in alarm. It isn’t every day you see him looking scared.

“Sweet Jesus, you could not make it up for being out of tune with where we all were,” cried Eamon. And he reckoned people looked at these eejits and decided there and then they wouldn’t be behaving like that.

Speaking of food supplies, the Taoiseach appeared to pop a large boiled sweet in his mouth when he sat down

In an unusual, somewhat whimsical speech, the Green Party leader also made a plea for garden centres to be kept open. A good idea – gets people out in the fresh air. They can also buy seeds and plants and do up a sunny window-box when they are self-isolation. And if food supplies become scarce and things hit really hard in a month or two, “we’ll have our salads ready to go.”

The Taoiseach arrived for the start of the debate, mainly to give moral support to his Minister for Health, who looks knackered. Face the colour of chalk, eyes like the proverbial two cigarette burns in a blanket, Simon Harris put in a very impressive and reassuring performance despite his appearance.

Speaking of food supplies, the Taoiseach appeared to pop a large boiled sweet in his mouth when he sat down. Although it could have been a hard boiled egg – hard to see from our socially distant distance. We could see his jaw moving and cheeks bulging, though, for much of his sojourn in the chamber.

He didn’t speak. Tánaiste Simon Coveney spoke near the end of the debate. He was straight-talking, like the Taoiseach had been during his state of the nation address on Monday night.

He accepted that some TDs had issues about the civil liberties aspect of the legislation.

“I get those concerns, as does the Government. There are, however, times when temporary measures need to be introduced to respond to something that has come out of leftfield. Sixteen or 18 weeks ago, none of us had heard of Covid-19 and we are now preparing for it to sweep through our population.”

It was this sense, repeated by many speakers, of the calm before the hurricane which was unsettling. For all the protective measures in place, things still seemed normal enough. The sense of waiting for something awful to happen was unnerving everyone.

Robert Troy and Mattie McGrath were among TDs who said that people were still going into pubs, often to lock-ins, around the country. The sort of “high-jinks” seen in Temple Bar and around the country had to be stopped. Mattie also said people, including some TDs who went to the Cheltenham races and were in Leinster House, should self-isolate. He didn’t name names.

However, he sounded a note of optimism.

Sinn Féin’s Louise O’Reilly, a former trade union official, admitted that she “sobbed her heart out” before coming to the Dáil after hearing the stories of people who are out of work and fearful for the future.

In an effort to assuage the fears of speakers who were not happy with some of the emergency powers given to the authorities, Fianna Fáil’s Jim O’Callaghan, a senior counsel, said that similar powers are on the statute books from 1947.

“There is no time for petty party politics during a pandemic,” said Simon Harris.

What it was, though, was very tense: Who would cough first? Or, heaven forbid, sneeze.

And nobody did that either.

Three relatives dead after apparent murder-suicide in Kanturk, Co Cork 16:05
Covid crisis: Five dead in North and 727 new infections 15:24
Number in hospital with Covid-19 at highest point since May 13:41
Almost 20% of staff at Dublin hospital have antibody evidence of Covid-19 infection 13:23
Family proud of Irish volunteer ancestor who died on hunger strike in 1920 10:33