Miriam Lord: Nothing is sacred as Dáil all but forgets about blasphemy

Apart from Brendan Howlin urging a Yes vote, not many Deputies seemed to care 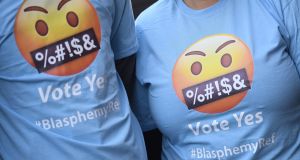 Canvassers promoting a Yes vote for the upcoming referendum on blasphemy, in Dublin. Photograph: Clodagh Kilcoyne/Reuters

Sounds like a clever name for a hipster sandwich joint in Waterford. It could attract a crowd.

Who cares? Not too many in Leinster House, or so it seems.

There’s a referendum on the issue on Friday. But you wouldn’t know this if you spent a lot of time hanging around Dáil Éireann, losing your marbles.

The place was buzzing on Wednesday, but it wasn’t to do with any ballot. It was down to the impending Halloween break. There were pumpkins in the canteen, and they weren’t all politicians.

In the fevered run-up to this vote on the removal of the offence of blasphemy from the Constitution, the issue was broached a month ago by Mary Lou McDonald. “In the coming weeks, we will have a referendum on the issue of blasphemy. I am sure it is a very worthy issue but it is not the most pressing one we face,” said the Sinn Féin leader.

And that was the last mention until Leaders’ Questions on Wednesday, when Brendan Howlin, the Labour leader, used his time to urge a Yes. At least someone didn’t forget.

The laid-back approach to this vote is in stark contrast to the impassioned arguments in the weeks leading up to the last ballot on constitutional change – the abortion amendment.

The blasphemy Bill enjoyed a very smooth passage, zipping through in jig time when the Minister for Justice brought his “modest” amendment before the Dáil on September 18th.

“The removal of the offence of blasphemy from the Constitution is, on the face of it, relatively small,” said Minister for Justice Charlie Flanagan. “Nonetheless, it would be deeply symbolic and, in a very tangible way, confirm our status as a modern democratic society where free speech is valued and multiculturalism is embraced.”

He also pointed out that retaining a blasphemy law impacts on Ireland’s international reputation. “Even if the view is ill-informed, it marks us out as a country which keeps company with those who do not share the fundamental values we cherish, such as belief in freedom of conscience and expression.” Our law “gives comfort to other jurisdictions that can use it to justify the more extreme regimes they apply”.

The Bill was supported by all sides, including Mattie McGrath.

“I am aware that many people will see the position I am taking as some kind of concession to those who want to remove even the mention of God or the sacred from our culture and society. That is emphatically not the case,” said the Independent TD for Tipperary. “I simply hold the view that it is not tenable for the State to involve itself in the making of theological judgments, much less enforce specific theological or philosophical judgments by any one particular creed or church.”

Friday is not all about Ireland's slapstick presidential election

That leaves him at odds with Senator Ronán Mullen, still gamely batting to keep blasphemy on the books and supplying relieved broadcasters with their dreaded balance. Ronán maintains his stance is mainly (but, eh, not entirely) because he is most concerned about the cost of holding a referendum that isn’t absolutely necessary.

Flanagan said he was delighted to have Mattie on board. He wanted “to say how heartened I am that no deputy has spoken in favour of retaining the offence of blasphemy in our Constitution. I hope that, when the people vote on this proposal, they will see the merits of the proposed deletion”.

So, a rare moment of total unanimity in the Dáil, but there has been precious little said on the issue since then.

Perhaps Howlin was worried about complacency when he reminded everyone about the imminent vote. Friday is not all about the slapstick presidential election.

“We should remove blasphemy from the Constitution,” was his clarion call.

But the Labour leader stressed that legislation against religious hatred must then be strengthened.

“As a tolerant and diverse society, one thing we cannot tolerate is intolerance. Blasphemy is an offence that allows a group of people to be intolerant of simple difference ... We should send a clear signal of personal freedom to those countries where blasphemy is still a very serious matter – in some cases a capital offence. All too often the offence of blasphemy is used as cover for persecution of religious minorities or non-believers.”

He then asked deputies to consider the shocking case of Asia Bibi, “a Christian mother of five who was convicted of blasphemy for offering her co-workers a cup of water. They said she had made the cup ceremoniously unclean by drinking from it and ordered her to convert to Islam. Asia refused and expressed her faith as a Christian. She was charged with blasphemy, convicted and sentenced to death.”

She has been in prison for nine years waiting for the supreme court to hear her appeal. Pakistan is one of those countries that has used Ireland’s blasphemy laws as a justification for its own barbaric policies. Now, radicals have issued death threats against Asia and her family.

“She needs to be offered asylum,” Howlin told the Taoiseach, asking that the government, here and at EU level, put pressure on Imran Khan, Pakistan’s new prime minister, to secure her release. “Will Ireland offer Asia Bibi asylum here?”

It would be a sign of Ireland’s rejection of intolerance if the Government reached out to somebody like Asia. “Even if the authorities there release her, she should be offered asylum somewhere and why not offer her asylum here?”

Leo Varadar promised he would discuss the case with the Minister for Foreign Affairs. “It is important that we stand in solidarity with Christians who are being persecuted around the world,” he said.

A Yes vote on Friday, said the Taoiseach, would be a signal to other countries that Ireland stands for freedom of speech and freedom to have, or not to have, a religion. And maybe just the tiniest gesture of solidarity with Asia Bibi and her family, too.