Miriam Lord: Ministers bolt for beach after being held captive in Kerry 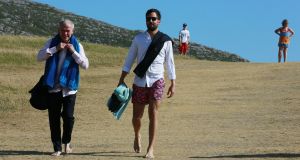 Closeted in a snug-fitting room for nearly six hours on a very hot day with no break for lunch, incessant talking and a sun-drenched beach winking at them from just over the hill. If ever Leo Varadkar had the makings of a Cabinet rebellion on his hands, it was on Wednesday in south Kerry.

It may be the thought that counts but, under the circumstances, the Taoiseach’s idea of treating his Government Ministers to a summer away day on the shores of the Atlantic seemed more like punishment than pampering.

As the Ministers squeezed into the dining room of Derrynane House, worried onlookers wondered if the large windows around the table might be opened in the event of heated exchanges. Apparently not.

How Leo’s troops must have longed to escape and paddle in the warm shallows of the Atlantic. But it would be a long, long time before they would finally experience the relief of Cabinet Emancipation in Daniel O’Connell’s beloved ancestral home.

On the plus side, there were no toilets. So whatever about size of the expenditure decisions being made inside the south wing, everyone had to go outside and through the courtyard to spend a penny.

The Attorney General was spotted rushing out the main door, ripping his tie off in the process and unbuttoning his collar before ambling beachwards

It was hours before they even got to hear Simon Coveney talk in exquisite detail about Brexit. Although after the Cabinet was finally liberated from the extension added to the original house in 1825 by the Liberator, the Taoiseach summed up where the Government was at, Brexitwise.

“If the proverbial does hit the fan we won’t find ourselves as exposed as we were 10 years ago.”

Having delighted his Cabinet with a trip to the home of one of his “historical and political heroes” for a meeting which didn’t need to be crammed in between Dáil business, everyone was up for lengthy discussion.

When the meeting finally drew to a close, most of Leo’s Derrynane deliberators legged it. The Attorney General was spotted rushing out the main door, ripping his tie off in the process and unbuttoning his collar before ambling beachwards. But Séamus Wolfe was left trailing in the wake of Minister for Education Richard Bruton and Minister for Housing Eoghan Murphy (although he posted the best entry in Derrynane’s visitors book: “Up the Dubs!”).

The pair of them were out on the lawn and belting for the sea before most of their sweaty colleagues had emerged. Still in their business suits, Bruton had a kit bag slung over his shoulder and Murphy was clutching his togs and a towel.

By the time they climbed over the dune and reached the sand, Richard was minus his shoes and socks and Eoghan was carrying his pinstripes and wearing pink swimming shorts.

There just happened, by some wonderful coincidence, to be an individual on hand to shoot some very nice action shots of Murph running through the surf like an extra on Baywatch.

The Taoiseach arrived late because he was stuck behind a tractor on the narrow road from Sneem to Derrynane. This led to unfounded rumours that the driver of the tractor was wearing a flat cap and travelling from the direction of Kilgarvan. One of the Healy-Reas was allegedly spotted lurking in the Ministers’ hotel after they arrived on Tuesday night.

Before Leo arrived, Coveney gave the latest state of play on Brexit. A number of colleagues clustered around him – Minister of State Brendan Griffin, for the local angle; Minister for Agriculture Michael Creed, because he isn’t seen much; Minister for Business Heather Humphreys, for that vital feminine element; and a smiling super-junior Finian McGrath, because he loves having his photo taken.

Simon, in a nutshell: “Britain far too long negotiating internally . . . Send a clear signal . . . Best possible outcome . . . Quite frankly, we’re running out of time . . . No-deal Brexit very unlikely . . . Foolish to overreact . . . But have to prepare for all the outcomes.”

The approach to adopt, he said – and this was later emphasised by the Taoiseach – is “a middle case scenario”. And if the worst comes to the worst, the Government, along with other European Union countries, will just have to “accelerate” its plans in the case of a hard Brexit.

They both referred to what sounded like “sanitary and fido sanitary checks” in the aftermath of the British withdrawal. Must be something to do with pet passports and all dogs will have to be thoroughly washed as a consequence of Brexit.

Actually, it may be phytosanitary checks.

Most of the Cabinet had travelled to Kerry the night before. The media camped out in lovely Waterville in the Butler Arms Hotel while the politicians went to the other side of Derrynane and stayed in Sneem. (Except for Shane Ross, who likes to be different. He pitched up in Waterville too.)

We hear the Taoiseach had dinner in the Park Hotel in Kenmare on Tuesday night where hotelier Francis Brennan was all aflutter with the VIP guests and flitting around like the busy bee he is, making sure all was in order for Leo and his dinner guest, the Minister for Finance.

After ploughing through a very heavy agenda, the politicians didn’t have much time to look around the house, which has been wonderfully and faithfully restored by the OPW. So they didn’t see O’Connell’s death bed or the magnificent ornate chariot in the coach house. The Liberator made his triumphant progress through Dublin in it after he was released from prison in 1844.

So many general election ideas in Derrynane for ambitious Leo Varadkar – from monster rallies to Fine Gael Emancipation – otherwise known as an overall majority – to triumphal chariots for taoisigh should that dream ever come to pass. Repeal of the Act of Union would automatically follow as they wouldn’t have to rely on Shane Ross and his alliance to form a government and the confidence-and-supply agreement with Fianna Fáil could go out the window.

The Taoiseach hit on the idea of a Cabinet trip to Kerry on a private visit to Derrynane last September. He saw the dining room and suggested to OPW house manager Adrian Corcoran that it would make a wonderful venue for a Cabinet meeting. Leo’s speechwriter, historian Patrick Geoghegan, has written the two most recent biographies on the Liberator.

The day was hard work for the politicians, but it was a rare break in the sun for their accompanying handlers and advisers, who could relax once they had committed their charges to ministerial day care.

Not a month ago, Prince Charles and Camilla also visited Derrynane House. They later walked the beach, the Duchess of Cornwall walking barefoot in the sand.

This time, Bruton and Murphy did the strolling. (Leo had a brief walk, but kept his shoes on.)

The two Ministers then went swimming in dangerous currents and were ordered back to shore by the lifeguards.