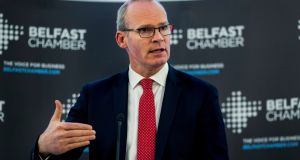 Minister for Business Heather Humphreys and Fianna Fáil’s Brexit spokeswoman Lisa Chambers have clashed over the Government’s claim that the no-hard-border solution in the Brexit deal is permanent.

Questioning the Minister at the Oireachtas Business Committee, Ms Chambers took issue with the Government’s view that the proposed Brexit agreement amounted to a “permanent arrangement” to replace the “backstop” insurance policy to avoid a hard border after the UK exits.

The Fianna Fáil TD said it was “disingenuous” of the Minister to suggest that the Brexit agreement amounted to a guarantee that there would be no hard border ever in the future given that the Northern Ireland Assembly could vote to leave the customs arrangement after four years, resulting in a hard border.

“You can’t give that assurance,” Ms Chambers told the Minister.

Ms Humphreys argued that the Brexit deal was the “best possible outcome”, and that it amounted to a “permanent structure” to deal with the issue of avoiding a hard border.

Meanwhile, the Tánaiste has said he believes any Brexit extension granted to the UK by the EU will be a flexible one.

Speaking to business leaders in Belfast, Simon Coveney said the Government was supportive of facilitating the extension which has been requested by the UK.

“I think that extension will be flexible, and that will allow the UK to leave the EU if they can get a deal done well in advance of the end of that extension period, which looks like it will be the end of January,” Mr Coveney said.

However, he also said that while Ireland and the president of the European Council, Donald Tusk, supported the extension they would have to “wait and see” what the position was among other EU leaders and countries.

Mr Coveney was in Belfast to address the Belfast Chamber of Commerce’s annual lunch.

Referring to the temporary return of some politicians to Stormont on Monday in an attempt by unionists to block the decriminalisation of abortion in Northern Ireland, Mr Coveney said “a number of things happened on Monday that I think were unfortunate”.

He said that whatever people’s views this was an issue which should have been a devolved matter, but because of the continued absence of the Stormont government legislation passed in Westminster was now impacting on the lives of people in Northern Ireland.

Mr Coveney appeared to point towards further intervention on devolved issues by the UK parliament if Stormont was not restored, although he stressed that the restoration of the Assembly and finding common ground on Brexit and other issues was “where our energy should be focused”.

“If efforts continue to fail,” he said, “obviously we will have to look at a new approach”, and may have to “look at more decision-making in London”.

The Tánaiste also spoke of the Government’s desire to rebuild and strengthen both North-South and east-west relationships post-Brexit.

He believed there would be a “huge incentive for a lot of Irish companies to locate north of the Border, and to effectively operate the rules of the single market but at the same time have unfettered access to the UK”.