Miriam Lord: ‘Leo is like Hyacinth Bucket on speed these days’

Taoiseach feeds the faithful, Dáil bingo on the way and Clare Daly keeps it real 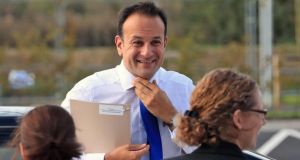 If an army marches on its stomach, then the Taoiseach’s key troops should be in fine fighting fettle come the next election.

Leo is like Hyacinth Bucket on speed these days, what with the amount of soirees and candlelight suppers he’s been hosting in his office.

New recruits, old recruits, rural Ministers, urban dwellers, this sort of Senator and that sort of Senator – Varadkar has been schmoozing them all as he works his way into the job. The reaction has been good. Politicians revel in attention and the boss is paying them loads.

Even the Ministers are cautiously pleased. This is because the Taoiseach, who clearly doesn’t want lean and hungry rivals posing a threat, has introduced breakfast for the Cabinet before they start their weekly meeting. It’s a long meeting, with a very early start and Ministers find it difficult to grab a decent bite as their day unfolds.

So Leo is laying on a brought-in cooked buffet of rashers, sausages and eggs, with healthy options for those who prefer the fruit and muesli path.

“I must say, he’s a great man for feeding people. You’d have been lucky to get a cup of tea and a biscuit from the last fella,” a senior Fine Gaeler told us on Friday. “The breakfast is going down rather well. Everyone is delighted.”

On Wednesday night, he hosted a dinner in his office for the Fine Gael members of the joint committee on the Eighth Amendment of the Constitution. Hildegarde Naughton, Bernard Durkan, Kate O’Connell, Peter Fitzpatrick and committee chairwoman Catherine Noone rocked up at the appointed time, having indicated their meal preferences in advance. Minister for Health Simon Harris also attended.

Their emailed invites included a link to Camille Thai’s online menu, with Leo asking his guests to place their orders.

“Who’s Camille?” wondered a Leinster House staffer when she heard about the event.

“And what’s it go to do with her thighs?” she asked, brain addled after a day of talk about abortion and what women who don’t want to be pregnant should and should not be allowed to do about their personal situation.

It’s not for us to say, but there might be a certain bishop out there who could explain?

Eyes down for bingo in the house

Great news, Dáil bingo may be on the way.

There has been a lot of disquiet among rank and file TDs from all sides who say the system for choosing people to speak during questions on promised legislation, where they get a chance to raise issues – and their constituency profile – is not fair.

What usually happens is that the Ceann Comhairle notes people who indicate they want to contribute and he writes their names down on a list. He then calls as many as he can before the time runs out.

Indicating usually involves a wink and movement of the finger, auction-style, or some vigorous arm flapping if Seán Ó Fearghaíl doesn’t notice. And sometimes he doesn’t. He has only two eyes.

Some of the more wily deputies are now delivering little notes to him, making sure they make the list.

The Healy-Raes do it all the time.

“I object to the practice of certain deputies handing up slips of paper to the Ceann Comhairle every day and getting preferential treatment over other members in the Dáil.”

His colleague, Kildare South’s Fiona O’Loughlin, vehemently agreed. She shares her constituency with Ó Fearghaíl and they would have been keen rivals before his elevation to the chair.

“We are all up here trying to compete and we should all be treated fairly” said Brassil.

The chair insisted that nobody was getting preferential treatment.

“The facility is not available to everybody. It is available only to those on the front row, ” persisted Brassil.

The Ceann Comhairle fought back. “It really is a matter of the most complete indifference to me how members communicate their desire to raise questions on promised legislation, whether you use notes, you signal by hand or you use the tom-tom drums,” he told Brassil and O’Loughlin. “I will call members in the order in which they indicate. If members have a better way of doing it, please come to my office and let me know.”

When things didn’t get any better on Wednesday, with O’Loughlin still not managing to get her spoke in, the party whip was consulted and then the Dáil business committee got on the case.

It seems they are very keen on a system whereby TDs take cards and their numbers will be called when it’s their turn to speak.

This could be great fun.

One and three: Willie O’Dea

On the day after Liam Cosgrave’s death, our headline of the week award goes to the Leinster Leader.

Leyden, by the way, was not among the ranks of the missing in the Seanad this week. Cathaoirleach Denis O’Donovan was absent, as were a number of his colleagues, including leader of the House, Fine Gael’s Jerry Buttimer, Fianna Fáil’s Seanad leader, Catherine Ardagh, Sinn Féin’s Máire Devine and independent Senator and aspiring president, Gerry Craughwell.

We hear they were on an Inter-Parliamentary Union trip to Iran.

Daly keeps it real for Binchy

The committee on the Eighth Amendment of the Constitution, otherwise known as the abortion committee, is motoring along at a decent pace. Its meeting this week heard some very informative contributions from expert witnesses while the TDs and Senators managed to keep it all civil.

Seasoned anti-abortion campaigner William Binchy has this message for the committee, if not the real Irish women enduring the everyday reality of having to leave the country to access abortion: “Let us stay real, let us keep our eyes open and let us recognise the genuine humanity and equal worth of every human being. That is the premise on which my remarks are based.”

Independent TD Clare Daly, noting comments Prof Binchy made about equality, recalled a quote from him: “True equality never requires the pretence that two relationships with different capacity are the same when they are not. It never justifies the imposition of a false uniformity.”

This, when he was campaigning for a No vote in the marriage equality referendum campaign.

“Do you not think that the equal right to life of the woman and the unborn is in fact a pretence that their capacities are the same, when they clearly are not? One is a born, living human being and one is not,” she said.

“I am a little puzzled. Unless I am getting very old and very forgetful, I don’t believe I said that, ” Binchy replied. Did she have the exact quote? The relevant citation?

“A questioner should not attribute a specific quotation to a person he or she is questioning if it is not actually what he or she said. I hope I am not having a memory block but I am fully confident that I did not say what the deputy has attributed to me. In those circumstances, if I am seen as being a bit fussy for objecting and refusing to accept an entire quotation which was falsely attributed to me, I would, with respect, encourage the deputy to accept that I am entirely entitled to defend myself.”

Daly found the relevant quote, with his name attached. “It was a press statement for the group of senior lawyers, including you, Patrick Treacy and Shane Murphy, in the Lawyers for No group campaign in the marriage referendum. It is a direct quote which was covered in CatholicIreland.net.”

“I confess that I had forgotten about that statement because it was a corporate statement. I must say that,” said the veteran campaigner.

Another committee member, Independent TD Mattie McGrath, holds diametrically opposed views to those of Daly when it comes to abortion. He was able to marshal plenty of facts, figures and somewhat graphic stories during the hearing.

This year, not for the first time, McGrath travelled to the US on a trip funded by the anti-abortion organisation Family & Life. He was part of a delegation which included the DUP MP Ian Paisley jnr and his MLA colleague Paul Givan.

Mattie, who was with his wife, visited Washington DC and New York and lobbied senators and congress members “on the undocumented and on life issues”. During his American sojourn, he also visited the pro-life Heritage Foundation, a leading conservative think tank.

Durkan clarifies his views on rape and abortion

Veteran Fine Gael TD Bernard Durkan came under heavy fire after last week’s meeting of the abortion committee when he made some comments about how, as he understood it, women deal with the aftermath of rape.

He addressed those remarks on Wednesday. “I have gotten myself into difficulty in the past by suggesting that in rape situations there should be a quick intervention. The counter-argument has been that the child who is not yet born is an innocent victim as well, and that is a reason to allow the pregnancy to continue. I do not accept that. Apart altogether from the legal procedures taken against the perpetrator of a violent criminal act, there needs also to be a recognition that to allow the victim to become a victim again, as it were, and to have to continue to live with that, is unfair, unjustified and to my mind illegal in terms of an act against the person going unchallenged.”