Meanwhile, Leo proves to be the perfect host as Fine Gael looks forward to summer nights 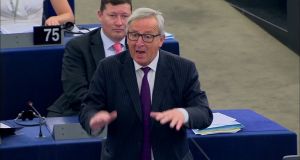 Jean-Claude Juncker blew a gasket in the European Parliament on Tuesday when hardly any MEPs turned up for a session reviewing Malta’s EU presidency.

“The European Parliament is ridiculous, very ridiculous,” fumed the commission president. “The fact that about 30 MEPs are seated in this debate is enough to show that the parliament is not serious.”

“I salute those that have taken the trouble to be in the room,” he began, surveying the largely empty chamber.

Indeed, had it not been for the members of his own team, parliament staffers and the large entourage accompanying Maltese prime minister Joseph Muscat, the turnout in the vast Strasbourg “hemicycle” would have been even smaller.

This perceived slight to a fellow leader of a small state was too much for the former prime minister of Luxembourg, who was clearly furious as he surveyed the rows of unoccupied seats. He said that if Angela Merkel or Emmanuel Macron had been speaking, “there would have been a full house”.

However, with just a handful of the 751 MEPs present, the head of the EU’s executive body was more or less talking to the wall.

Just two of Ireland’s MEPs attended the session - Fine Gael’s Mairead McGuinness, who chaired part of the debate as parliament vice-president, and Seán Kelly, who spoke at the event. Even if the remaining nine had turned up, their presence wouldn’t have taken the bare look off the proceedings.

The no-shows were absolutely unapologetic about their absence. (Brian Crowley wasn’t in Strasbourg and hasn’t attended parliament for three years due to illness.)

“Mr Juncker’s comments were ill-judged. These events are not debates but stylised one-minute speeches by MEPs and there should be less of them,” said Nessa Childers, adding that MEPs can follow the proceedings on TV while in their offices.

Sinn Féin’s Matt Carthy did just that, explaining that his party’s four MEPs were busy with other matters. “Our heavy workloads, which have obviously been added to by our comprehensive engagements on Brexit, mean that we don’t have the luxury of spending hours in the plenary chamber.”

There seemed to be general agreement that the debate on Malta’s hosting of the presidency wasn’t much of a draw.

“Listening to a lap-of-honour speech from an outgoing presidency isn’t my idea of a productive way to spend time,” Independent Luke “Ming” Flanagan said. “It was basically a ceremony. Juncker would have had a good point if it was a significant debate, but it wasn’t.”

Ming pointed out that he attended a number of debates on Tuesday, including those on disclosure of tax information and EU defence.

“I also went to a meeting on the Common Agricultural Policy review which overlapped with the defence debate. All vital to our future.”

Similarly, Marian Harkin was up to her eyes with other business, attending a meeting relating to her employment and social affairs committee.

“I think Juncker was completely out of order and I can guarantee you when I left at 11.45pm Juncker was not around.”

She said MEPs “pick and choose issues they are involved or interested in” because it isn’t possible for them to attend every debate.

“I think Juncker has done both himself and the parliament significant damage. He has picked a fight where none was necessary and his outburst will not change anything, but may harm attitudes towards him, which is to nobody´s benefit.”

Juncker’s hissy-fit was condemned at the time by parliament president Antonio Tajani, who angrily defended his patch, telling Juncker to behave with respect.

“There are only a few members in the plenary . . . You are ridiculous! I want to pay tribute to the Maltese,” insisted Juncker.

“I ask you to use different language,” implored the president. “We are not ridiculous!”

Then Juncker said huffily: “I will never again attend a meeting of this kind.”

Happily, the two men made up shortly after their angry exchange. Juncker presented Tajani with a letter of apology.

The Taoiseach is continuing his get-togethers with his parliamentary party team before the Dáil breaks later this week for the summer recess.

He began a couple of weeks ago with a little soirée in his office for the 2016 intake of TDs. A light buffet and wine was laid on, along with a tour of Government Buildings.

He had his first batch of Senators over for a spot of schmoozing on Wednesday night. He couldn’t entertain them all because the room next to his office is too small. They got the guided tour too, and noticed all the framed GAA, soccer and rugby jerseys he has ready to hang up in his quarters.

Fine Gael has gone mad on team-bonding since Leo became Taoiseach. On Tuesday night, all the TDs and Senators are going on a night out to mark the end of the Dáil session.

Nobody seems to know where they are going and party chairman Martin Heydon has been keeping them in suspense about their Magical Mystery Tour.

We hear the bus mightn’t be travelling that far from Leinster House. The Guinness Storehouse might be the final destination.

Playwright Tom Stoppard was 80 on Monday. He held a huge birthday bash last Saturday in the Chelsea Physic Garden. The Daily Mail gave blanket coverage to the glittering event, which boasted “a crowd of 500 A-listers” and “had more air kisses than Oscar night!”

There were oodles of stars at the party, including Nigella Lawson, Jude Law, Joanna Lumley, Damian Lewis, Stockard Channing and Sienna Miller. Jeremy Paxman was there, along with Ian Hislop, Twiggy and Jemima Goldsmith.

They looked lovely in the photograph, although Socialist TD Richard Boyd Barrett was rather lost at the back of it. Boyd Barrett is adopted and Sinéad Cusack is his natural mother.

We’d love to hear all about the party. And if Richard got a chance at all to share a glass of champers and have a chinwag with Rupert.

O’Connor puts herself in Leo’s socks

Justin Trudeau wears novelty socks to major events and to meetings with political leaders and he’s the saviour of the free world.

Leo Varadkar puts on a pair of red, patterned cartoon socks for his meeting with Justin, and suddenly he’s Mr Wonderful too. It’s all good fun.

The Canadian prime minister wears a silver-grey suit and pink tie when he meets the Taoiseach. Not a bad word about it.

Then the pair of them change into their running gear and don dark glasses and take off for a run in the Phoenix Park, to be admired and swooned over as they display their manly curves while remaining statesmanlike and cutting edge.

That bout of vanity jogging on Tuesday evening was a show-off too far. It sent the day’s light-hearted exchanges between Trudeau and Varadkar from charming schtick to peak-barf.

But aren’t they great lads all the same?

Meanwhile, women in top-level politics tend to dress conservatively because it cuts down on distracting criticism and snarky comments about their fashion sense.

Mary Mitchell O’Connor was probably watching the sock hullabaloo and the shorts-and-singlet episode with a rueful eye. The fine Minister of State and former jobs minister wears bright clothes and high heels and paints her nails a variety of vivid, sparkly colours.

Sure you couldn’t be letting a woman loose at important events looking like that and then expect her to have a brain and be taken seriously by important businessmen and commentators and the like.

It’s good to know that St Justin of Trudeau is not perfect.

Last year, he became embroiled in a highly-entertaining spat in the Canadian House of Commons that became known as “Elbowgate”.

The incident happened after Trudeau got it into his head that opposition MPs were trying to delay a contentious vote. In the Canadian parliament, a vote is taken after the division bells have rung and the opposing whips have taken their seats near the house speaker.

On the afternoon in question, prime minister Trudeau looked down the floor of the crowded chamber and thought the opposition whip was being blocked from moving to his seat.

He sprinted down the chamber and barged into a knot of MPs, grabbing Conservative whip Gord Brown by the arm and propelling him forward - a highly unorthodox action.

Tracey Ramsey of the New Democratic Party described how the PM shouted, “Get the bleep out of the way”, as he waded in. In the commotion, Trudeau didn’t see MP Ruth Ellen Brosseau behind him and elbowed her in the chest.

Having returned to his seat and a standing ovation from government politicians, Trudeau realised what had happened and ran back to apologise, but Brosseau was gone. So he had a shouting match with her apoplectic colleagues.

The outrage (it was all pretty harmless) was enthusiastically discussed the following day for five hours.

“He manhandled the whip of the official opposition,” thundered Peter Julian (NDP).

Peter Van Loan of the Conservatives succumbed to a fit of the melodramatics: “I witnessed as he strode across the floor with anger fierce in his eyes and face.”

The woman who was inadvertently elbowed relived her ordeal for her fellow parliamentarians. “I was elbowed in the chest by the prime minister and then I had to leave. It was very overwhelming . . . I missed the vote because of this . . .”

Trudeau issued a series of ever more grovelling apologies to everyone who had ever darkened the door of the parliament building and eventually the furore blew over.

And he had been so good since the last time he lost his temper and had to make a big apology.

Back in 2011, during questions on the Kyoto Protocol and climate change, he took umbrage at a comment from the Canadian minister for the environment and shouted: “Oh, you piece of shit!”