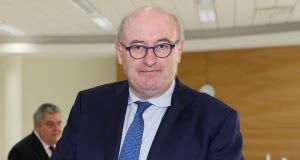 The main goals of the European Union’s agriculture policy should be helping farmers and protecting the environment, a consultation process on the future of the Common Agricultural Policy (CAP) has been told.

The European Commission received more than 322,000 submissions from a wide range of stakeholders, including farmers, citizens, organisations and other parties interested in the farm scheme.

Speaking at the “CAP: Have Your Say” conference in Brussels, where the findings were published, EU agriculture commissioner Phil Hogan said Europeans want high-quality food, farmers to do more to protect the environment and more investment in rural areas.

“I’m pleased to see two-thirds of farmers are willing to do more for climate and the environment,” he said.

Mr Hogan said the response to the process showed a high level of interest in the CAP, which he added “continues to support a dynamic agricultural sector, ensures safe and high-quality food for 508 million citizens”.

A key demand in the findings was that the CAP should deliver a fair standard of living for farmers, with a majority of respondents (88 per cent) recognising that farm incomes are lower than the EU average. Respondents said direct income support for farmers was the best way to achieve this (66 per cent).

Respondents said farmers should be encouraged to play their part in tackling climate change and protecting the environment, enhancing biodiversity and ensuring a more sustainable use of pesticides and fertilisers.

Citizens and farmers alike want the future CAP to be simpler and less bureaucratic in order to more effectively rise to these challenges, Mr Hogan said.

The findings will feed into the commission’s ongoing reflection on the future of food and farming. A “communication on modernising and simplifying the CAP” will follow by the end of the year – while the difficult issue of future CAP payments, especially in the context of Brexit, has yet to be determined.

Speaking in Brussels, IFA president Joe Healy said the delivery of a strong, sustainable and competitive Irish agriculture sector required an increase in the CAP budget.

“It must be recognised that low farm incomes remain a major challenge. Previous cuts to the CAP budget have undermined the effectiveness of this common policy and its ability to provide a fair standard of living for producers. EU farmers are meeting high regulatory standards in the areas of food safety, animal health, welfare and the environment,” he said.

Mr Healy added: “The departure of the UK from the EU will certainly pose additional challenges for the CAP budget, as the UK is a net contributor to the overall EU budget, but the EU must step up and support farmers and food production in the EU27.”

In a speech on Thursday, EU chief Brexit negotiator Michel Barnier acknowledged the “friction” for Irish farmers and those in the food industry arising from a hard Brexit.