People Before Profit TD Richard Boyd-Barrett has revealed he may be among those adopted whose births were incorrectly registered. Video: Oireachtas TV 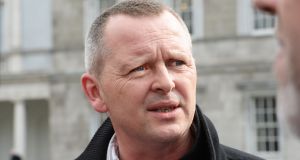 Richard Boyd-Barrett: When he brought the story closer to home, the TDs in the chamber looked and listened with a mixture of upset and concern. Photograph: Cyril Byrne

It’s getting to the stage now where we’d be glad to see a bit of ordinary bribery and corruption.

A nice political scandal involving money and galloping amnesia, horses, high-living and the type of people who know that peccadilloes aren’t for garnishing your chicken fajita.

Because it’s just one dispiriting episode after another in the Dáil these days.

Although it’s only a few weeks since the place was convulsed by the cervical cancer screening debacle and the harrowing stories of women caught up in it, so much more has happened in the interim.

First, the story was overtaken by the abortion referendum and upsettingly intrusive discussions about women’s private agonies and how much suffering is enough for them and how much is merely unfortunate. By Tuesday, after the overwhelming vote to remove the Eighth Amendment from the Constitution, a big majority of TDs welcomed the result, and they vowed to move on and legislate as quickly as possible. This included those who had opposed repeal.

But with the result beyond doubt and far too conclusive to invite credible challenge, the sense of relief among almost all politicians – particularly those in Fine Gael and Fianna Fáil – has been obvious in the Dáil and around Leinster House.

Certain Government representatives who disappeared off the radar during the campaign are noticeably putting themselves about again.

Quite a few who declared for No and then got a terrible shock after a thumping majority voted for Yes are radiating the relieved demeanour of TDs who never wanted to talk about abortion in the first place, don’t want to hear the word “abortion” ever again and won’t have to take the coward’s way out any more by pretending they don’t know enough about abortion to offer an opinion.

Things were settling down a little.

Perhaps a row over Project Ireland 2040 or another revelation from inside An Garda Síochána or the latest row between Winston Churchtown and the peasantry would nudge its way on to the Dáil agenda on Wednesday to lift the gloom a little.

There was an attitude that prevailed in this country for so long that others knew better. That attitude has slowly and thankfully been demolished’

Instead we got the story of Irish babies and toddlers illegally adopted in the 1950s and 1960s and given birth certificates identifying their adoptive parents as their biological parents. Now, on foot of documents discovered by the Child and Family Agency, Tusla, there is a list of people out there who may not know the truth and will have to be told.

This is devastating stuff and it may only be, as was repeated by a number of speakers during Leaders’ Questions, the tip of the iceberg.

And so we had the Taoiseach acknowledging “another dark chapter” in Irish social history and opining once more that the past is another country and they did things differently there.

“Some will say that the past should be left in the past and that we will do more harm than good by disclosing this information ... We disagree,” he told the Dáil. People have the right to know that information is available and must be told.

“Ultimately, it is their choice and their lives. They have a right to know about their identities and birth stories.”

At this point Leo Varadkar said he was “reminded” of a quote from the American author Alex Haley.

“In all of us there is a hunger, marrow-deep, to know our heritage – to know who we are and where we have come from ...”

The Taoiseach recalled in the Dáil on Tuesday that he quoted Maya Angelou on Saturday.

Enough of the soundbites or prepared scripts, responded Micheál Martin. Would the Taoiseach tell him when the legislation to facilitate children who have been adopted to trace information on their true identities would be passed?

Varadkar, and Minister for Children Katherine Zappone, said everything was being done to get the Bill passed as quickly as possible, but there are some sensitive issues outstanding.

Labour’s Jan O’Sullivan summed up the mood in the chamber when she spoke of the referendum bringing about “an unveiling of the wrongs done to women” in Ireland and shining a light on the reality of people’s lives.

“There was an attitude that prevailed in this country for so long that others knew better. That attitude has slowly and thankfully been demolished,” said the Limerick TD, citing the new evidence on illegal adoptions as “another failure by the State and those who controlled our society.”

The birth details have been officially described as “misclassified”.

O’Sullivan says this is not appropriate. “It sounds very innocuous. It is not what it is; it is illegal adoption and it is high time we dealt with issues that for too long have been kept in the dark.”

Richard Boyd-Barrett had a lot to say about “yet another bombshell exposing the toxic relationship between church and State in this country”.

But when he brought the story closer to home and personalised it, the TDs in the chamber looked and listened with a mixture of upset and concern.

“I was particularly struck by this scandal as I was adopted via the St Patrick’s Guild in the years affected,” he said. “I don’t actually know if I am one of the cases involved – probably not, but I have questions now, as do other members of both my adoptive and birth families.” His colleagues on all sides snapped to attention.

Thousands of people could be living in ignorance of their true heritage, he said. “They are going to have events that are life-changing visited on them.”

The Taoiseach said people will be given the support they need, and information will be given face to face, in a supportive environment in a venue of the person’s choice. No news will be delivered over the phone.

So here we were again in the Dáil chamber, sifting through the details of another scandal, one that has been known about for years with little urgency on the side of governments to get stuck in. One where people, as Boyd-Barrett put it, “have had their identities stolen and their welfare, particularly in terms of their health, compromised unless they know their proper biological heritage”.

After the spirit-sapping discussion of illegal adoptions, another long-running story was raised again amid calls for an open public inquiry into the Garda handling of the hit-and-run death of 23-year-old cyclist Shane O’Farrell in 2011. His family say the driver of the car should have been in prison at the time. They have compelling evidence.

This is another dark chapter. Lucia O’Farrell, Shane’s mother, has been refusing to let it close. In the Dáil, again not for the first time, TDs called for an inquiry. As the Taoiseach talked about a Gsoc investigation, he was met by shouts of “it’s a cover-up”.

It is a story that refuses to go away.

And as the evening approached, protesters gathered at the gates to put the cervical cancer screening controversy back in the spotlight. They called for mandatory disclosure of medical information, and supports for those affected by the cervical screen controversy.

So many dark chapters now.