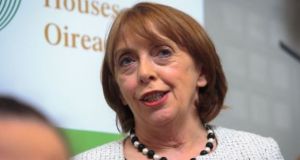 Social Democrats co-leader Róisín Shortall said an implementation plan had been promised in December, then by Easter, then at the end of May, but it had not yet materialised.

An alliance of politicians, policy experts and medics has criticised the delay in the implementation of the Sláintecare report, the 10-year cross-party roadmap for health reform.

Speaking in Dublin at an event marking the first anniversary of the publication of the plan last year, Social Democrats co-leader Róisín Shortall said it had been welcomed by Minister for Health Simon Harris, “but his actions have not matched his words”.

Ms Shortall, who chaired the all-party committee that drew up the Sláintecare document, said an implementation plan had been promised in December, then by Easter, then at the end of May, but it had not yet materialised.

Mr Harris is expected to bring the Sláintecare implementation plan to Cabinet in the coming weeks, but political sources say there is scepticism in the Department of Health, the HSE and, crucially, the Department of Public Expenditure about many aspects of the proposal.

The Sláintecare report was produced by a cross-party committee of TDs last year and adopted by the Dáil without a vote. In contains a 10-year plan for the reform of the health service, transforming it from a mix of public and private care into “an affordable, universal, single-tier healthcare system, in which patients are treated promptly on the basis of need, rather than ability to pay”.

The plan envisages significant increased funding for the health service, including a €3 billion transition fund to cover the cost of implementing the reforms, and a total separation of the public and private health systems.

Improvements in the public system would mean that fewer people would feel the need to buy private health insurance, the report argues. It recommends the withdrawal of the facilities used by private patients in public hospitals, ensuring that the membership of private schemes like the VHI would become more expensive.

It also recommends great improvements to the primary care system, which the Government has argued are already under way.

There has been little progress in the implementation of the reforms. An implementation office led by a chief executive was promised, but no appointment has yet been made. While funding for the health service increased substantially in recent budgets, there is no dedicated budget for reforms as recommended by the report.

Both Mr Harris and Taoiseach Leo Varadkar have frequently reiterated their commitment to many of the Sláintecare reforms.

However, Government insiders say that while there is enthusiasm for some aspects of the plan, there is scepticism about others. There is also a worry that channelling more resources into the health service will not necessarily see improvements in services.

“One year on, there has been considerable slippage on Sláintecare,” Ms Shortall said. She said people would have to “take to the streets” to demand its implementation.

Robert Yates, a health policy expert from the Chatham House thinktank in London, said many countries were moving towards a system of universal healthcare, where “voluntary private financing was replaced with compulsory public financing”.

He said that promising to provide such a system was a “no brainer” for politicians, as it would be very popular with the public.

Most speakers called for increased public funding for the health system. Orla Hardiman, a consultant at Beaumont Hospital, said the system currently relied in some instances on voluntary organisations raising money “through church gate collections”.

Steve Thomas, a health policy expert from Trinity College Dublin, said it would be “a tragedy” if Sláintecare was not implemented immediately. “It’s not just for the poor, the middle classes will gain as well,” he said. “We’ve seen lobbing of hand grenades at Sláintecare.”