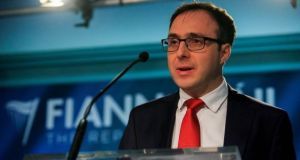 A Government Minister has warned of the return of ticket touting when live gigs and sports events resume with limited capacity in the wake of the Covid-19 pandemic.

Minister of State at the Department of Enterprise, Trade and Employment Robert Troy said the resumption of sporting and entertainment events with very restricted attendances will “create obvious potential for the resale of scarce tickets at inflated prices”.

Mr Troy who has special responsibility for trade promotion stressed that “I want to make sure there is fair access to tickets and events both during and after Covid-19”.

Touting of tickets and their resale at multiples of the face value have long been an issue in Ireland with several attempts at legislation to combat the practise.

Legislation introduced in the last Dáil by former Fine Gael TD Noel Rock and Fianna Fail TD Stephen Donnelly was amended by the then government and was sent to the European Commission for assessment.

The Minister told the Dáil that he and Tánaiste Leo Varadkar will shortly introduce legislation to “prohibit the resale of event tickets above their original price”.

Government officials last month warned that the new law must be in place before the rescheduled Euro 2020 championships next year, because of a commitment made to soccer’s governing body Uefa.

Mr Troy was speaking during a debate on protecting jobs and supporting business.

In the debate Sinn Féin finance spokesman Pearse Doherty said the Government was presiding over a jobless rate of 15.4 per cent. “That’s higher than unemployment rate under President Trump (in the US),” he said.

Accusing the Coalition of being slow, “lethargic” and with an insufficient response to businesses, he said Ireland had the second highest level of jobs losses in the EU in the three months from April to June. That was more than twice the European average, he said.

The Donegal TD also sharply criticised the implementation of the €2 billion credit guarantee scheme. Mr Doherty said it came five months after a similar scheme was opened in other EU countries. And as of Friday last “not a cent” has been paid. “This delay has cost jobs and is threatening viability.”

The party’s enterprise spokeswoman Louise O’Reilly said the recovery could not be built on the “back of low pay and precarious work, nor through the exploitation of workers.”

“Some of the most negatively impacted sectors of our economy are some of the ones with the lowest pay and worst conditions.”

Mr Varadkar, who opened the debate, acknowledged the need to attach greater value to the work of low paid employees who were most relied on during the pandemic.

He said there was a “need to examine why those receiving the PUP (pandemic unemployment payment) seem to be disproportionately young, from a migrant background and work in the private sector.

“Those on whom we most relied during the pandemic - shopworkers, delivery drivers and cleaners - tend not to be well paid or well protected. We need to value their work more and do better by them in future,” he said.