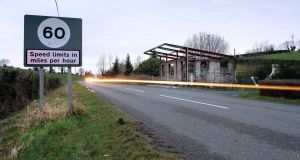 A former customs post on the Border between Rosslea and Monaghan. Photograph: Bryn Colton/Bloomberg

Taoiseach Micheál Martin will invite groups from North and South on Thursday to join a dialogue on a “shared Ireland” and to suggest projects for a combined €500 million investment over the next five years.

In a major speech to an online seminar to be webcast from Dublin Castle, Mr Martin will set out the agenda and programme of work for the new shared island unit, set up in the Department of the Taoiseach recently and which was bolstered in last week’s budget by a €500 million fund.

On Wednesday, Mr Martin told the Dáil that the money would be ringfenced for use on cross-Border projects.

He is also expected to launch a series of online North-South dialogues in today’s seminar, for which more than 1,000 participants have registered, Government Buildings said.

“Strengthening social, economic and political links on the island and the promotion of all-island approaches to the strategic challenges facing Ireland, North and South, are key objectives for this work,” Mr Martin told the Dáil on Wednesday.

Mr Martin said the funding “opens the way for investment in new all-island initiatives in quite a number of areas, including primarily infrastructure but also research, health, education and the environment, as well as addressing the particular challenges of the northwest and Border communities.

“It will also support our community to achieve greater connectivity on the island and to enhance the all-island economy and all aspects of North-South co-operation. The funding will be dispersed to departments and agencies in line with the programme for Government priorities and on the basis of collaborative North-South projects,” he said.

The shared island initiative is Mr Martin’s response to Sinn Féin’s growing push for a referendum on a united Ireland, though under the Belfast Agreement the calling of such a vote is a matter for the British government, which must first judge that it is likely to pass.

Sinn Féin has been suspicious of the shared island project, but on Wednesday party leader Mary Lou McDonald welcomed Thursday’s event and said her party “looks forward to that and to the process wherein all parties can actively participate in the shaping of the work and mission of the shared island unit”.