Micheál Martin to prioritise fight against Covid-19 as leaders react 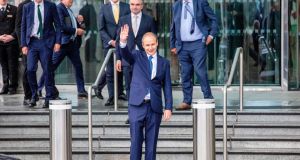 Taoiseach Micheál Martin will establish a special Cabinet committee to deal with restoring jobs in the economy lost in the coronavirus pandemic.

Announcing his new Cabinet to the Dáil - many of the jobs had previously been leaked - he also said that Green Party Senator Pippa Hackett would be Minister of State for Agriculture. It’s the first time a Senator has been appointed as a Minister since the early 1980s.

When the Dáil convened in the Convention Centre on Friday he said that “there is no question of our first priority, continuing the fight against the Covid-19 pandemic.” And he said there will be a new “shared Ireland unit” formed within the Department of the Taoiseach.

The new Government will work closely with democratic institutions in Northern Ireland, and will seek to ensure the full implementation of the Brexit agreements between the UK and EU. Mr Martin said he wanted to shape a “fair and inclusive recovery”.

The Department of Children will be expanded, with the coordination of disability-related issues handled by a senior Minister for the first time, Mr Martin said.

“No one yet fully understands what the lasting impacts of the pandemic will be”, but he said they, “must help schoolchildren so that they do not fall permanently behind.”

“We must help people to cope with the personal impact of stress and anxiety. We must do everything possible to quickly recognise and decisively respond to groups and communities which show new and unexpected impacts from the pandemic.”

Tánaiste Leo Varadkar has described the day as historic for Fine Gael, now returning to office for the third term in a row. But he said it was “not a day for rancour” and expressed sadness for those who were now leaving office.

Mr Varadkar said he and Mr Martin had faced each other across the Dáil chamber for three years. They were very different people but had things in common including a determination to better the lives of the people of the country.

He describes the Green Party getting back into government as an “extraordinary comeback” and praised party leader Eamon Ryan for bringing it from the ruins of 2011 back to where it is today.

He added that: “I know Fine Gael ministers appointed today will serve to the very best of their abilities. Our country has been through a terrible emergency where many people have lost their lives.

“This Government will take the transformative action required to rebuild that that has been swept away.” He promises it to be a government of action.

Mr Varadkar, the new Minister for Trade, Enterprise and Employment added there would be a July stimulus package to deal with Covid-19 and a major national economic plan in the autumn that included climate action.

Mr Ryan said the Government should not be afraid to fail and stressed the need to support communities. Referring to leading public servants including former Taoiseach Sean Lemass who changed the government’s strategic direction in the 1960s, he said they had reoriented Ireland from being a closed agrarian economy to being an open one which attracted industry and foreign investment.

In her address as leader of the opposition, Sinn Féin leader Mary Lou McDonald criticised Fianna Fail and Fine Gael and claimed they were colluding to deny Sinn Féin a place in government and frustrating the will of the people.

She describes the Programme for Government as lacking in ambition but said ‘the century-old impulse to grab power’ had led to Fianna Fáil and Fine Gael coming together.

“The great national project of reunification is not included in the Programme for Government. Not a whisper,” she says.

She said that because of its lack of ambition the Government was already on borrowed time. Fianna Fáil and Fine Gael, she claimed, have “coalesced and colluded in frustrating the voice of change”.

Labour leader Alan Kelly warned that the Government had to appeal to the Supreme Court over the sectoral work agreement dismissed by the High Court earlier this week. He said that agreement had protected tens of thousands of lives.

Mr Kelly also criticised the introduction of a rotating Attorney General and said it made no sense to change this role half way through. The Government has appointed Paul Gallagher SC to the role.

Mr Kelly also hit out at reports that the Government would appoint 20 Ministers of State and said the taxpayer should not have to fund this.

Labour education spokesman Aodhán Ó Riordáin, said it felt like a war-like government had been formed. “Politics can be harsh and tough business,” he said. “My party does not want to trade in hatred and division”, but he said they wanted to oppose elements “which we feel are wrong and support elements we feel are right”.

During the Covid-19 pandemic “we thought the penny had finally dropped,” in relation to services, she said.

Pointing to health, childcare, direct provision and housing, she said the Government moved to socialise so many public services during the pandemic.

“Initially it seemed the Government was very clear about radical change,” she said.

But it became clear very soon that “Fianna Fáil and Fine Gael wanted to go back to the old way of doing things” once the crisis was over.

She said the Social Democrats knew Fine Gael were “not going to change their spots”.

She called on various Government Ministers to take action on issues asking Minister for Justice Helen McEntee to extend maternity leave to women affected by the pandemic. She called on Minister for Education Norma Foley to ensure schools were offered “non-ethos based sex education”.

Rise TD Paul Murphy appealed to disaffected Green party members who put up an “impressive” fight against the programme for government to leave the party. “Don’t be a mudguard” for this Government but join the left, he said.