Micheál Martin says ‘no question’ of his party voting for Government 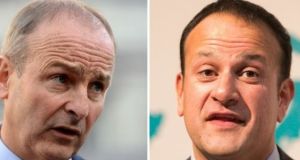 Fianna Fáil leader Micheál Martin has said there is “no question” of his party voting for the Government as requested by Taoiseach Leo Varadkar as one of his TDs called for the general election to be held sooner rather than later.

Mr Varadkar has asked Mr Martin to support the Government in some Dáil votes if there is to be an agreed election date.

The pair will meet on Thursday night to discuss the timing of the election and the end of the confidence and supply deal, which sees Fianna Fáil underpin the Fine Gael led minority government.

However, Mr Martin told Newstalk he would not change his position that Fianna Fáil would only abstain rather than support the Government on certain votes.

It sets up a confrontation between the pair at their Thursday meeting.

“There is no question of Fianna Fáil taking that position, he knows that,” Mr Martin said, adding that Mr Varadkar should seek the support of Independents or smaller parties if he needed to make up the numbers in the Dáil.

The meeting between the two will take place in Dublin although the time and venue have not yet been confirmed.

Fianna Fáil TD for Roscommon Eugene Murphy said the time had come for an election, despite his leader saying April was the best time to go to the polls.

But he added: “The public is getting anxious for an election and is extremely anxious for a change of government but we have to be careful with Brexit as smoothly as possible.”

There is increasing speculation that the election date will fall within weeks, rather than months, with some Fine Gael TDs believing a February election is now on the cards.

Minister for Finance Paschal Donohoe said on Tuesday the Government needed to be able to enact Dáil business to continue, and this could require greater co-operation from Fianna Fáil.

“We need to have clarity within the Dáil regarding the ability of the Government to be able to do its business and... continue to deliver very important pieces of legislation.”

Mr Varadkar had also called for an agreed reform of the local property tax with Fianna Fáil, also seen as extremely difficult to secure.

“In order to see those kinds of changes made in this Dáil, it will need an enhanced form of cooperation with Fianna Fáil,” Mr Donohoe added.

“And the leader of Fianna Fáil has called for the orderly wind down of government.”

The Cabinet will hold a special meeting focusing on disability issues in Marino, Dublin, on Thursday. The venue is in the constituency of Finian McGrath, Minister of State for Disability Issues.

Fine Gael Ministers and Ministers of State will hold a meeting on Friday morning, followed by a gathering of the Fine Gael parliamentary party that afternoon.

Mr Varadkar is understood to have told people privately he wants the Stormont institutions back up and running before the election. The ongoing Stormont talks have a deadline of January 13th to succeed or fresh elections will be called in Northern Ireland.

There has been some speculation in Fine Gael that, in the event of a successful conclusion to the Northern talks, Mr Varadkar could meet British prime minister Boris Johnson in Belfast to oversee the restoration of Stormont and that the pair could hold a meeting on Brexit and the future of British-Irish relations.

Such a backdrop, suggest some Fine Gael sources, would provide a platform for him to call an election.

When the election is called the leaders of Fine Gael and Fianna Fáil are set to engage in a head-to-head general election debate, the first time the leaders of the two parties have squared off in 13 years.

Both Mr Varadkar and Mr Martin are keen to hold a one-on-one debate during the forthcoming campaign.

Mr Martin has already said he wants a head-to-head debate with Mr Varadkar during the campaign. And senior Fine Gael figures have confirmed Mr Varadkar favours such an encounter.

Well-placed Fine Gael figures said they are open to two televised debates: one between all party leaders, including Sinn Féin, Labour, the Greens and potentially others, and one between the two contenders for the Taoiseach’s office.

If confirmed, it would be the first direct debate between the leaders of Fine Gael and Fianna Fáil since Bertie Ahern and Enda Kenny squared off on RTÉ television, moderated by broadcaster Miriam O’Callaghan, a week before polling day in the 2007 general election.

The 2016 and 2011 campaign debates featured a number of party leaders.

The desires of both party leaders is dependent on the attitude of broadcasters RTÉ and Virgin Media. An RTÉ spokeswoman said: “The RTÉ Election Steering Committee will make any decisions around debates held on RTÉ. A wide number factors are taken into account and decisions have not yet been made.”

A Virgin Media spokeswoman said plans are being drawn up for its general election coverage, with a leaders’ debate a centrepiece of its coverage.