Meath woodland to be cleared in search for ‘Disappeared’ Joe Lynskey 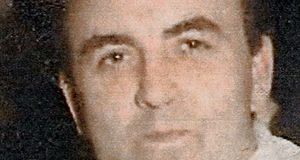 An area in Co Meath is to be cleared of trees by investigators trying to locate the remains of Joe Lynskey, who has been missing for more than 45 years.

Mr Lynskey, a former Cistercian monk from the Beechmount area of west Belfast, is part of a group of 16 Troubles victims known as the “Disappeared” who were abducted, murdered and secretly buried by republicans. He went missing during the summer of 1972.

Of the 16 Disappeared, the remains of 13 have been recovered. The last person to be located was teacher Seamus Ruddy, whose remains were recovered in northern France last year, more than 30 years after his murder in Paris by the INLA. The remaining three are Mr Lynskey, Co Tyrone teenager Columba McVeigh and Captain Robert Nairac.

Preparatory work is expected to start today to clear a small area of land in Oristown, Co Meath in advance of a search for Mr Lynskey.

The Independent Commission for the Location of Victims’ Remains said the search would begin in the next few days.

Geoff Knupfer, the commission’s lead investigator, said an extensive search was carried out for Mr Lynskey’s remains in Coghalstown, which is near the Oristown site, in 2015.

“During that search we found the remains of Seamus Wright and Kevin McKee but unfortunately we drew a blank in relation to Joe Lynskey,” he said.

“As we do after every unsuccessful search we go back and review all the information that we have pulled together to see if there are other lines of inquiry to be pursued.”

He said the team would be focusing on a “quite a small area of woodland” at Oristown near where the body of west Belfast man Brendan Megraw was discovered in 2014.

“We will start as soon as the land is cleared of trees and our contractors and forensic archaeologists can get to work,” Mr Knupfer said. “We anticipate that this will not be a long search either way.

“The Lynskey family have been informed and they know only too well that there is no guarantee of success but we will continue to do everything we can.”

Mr Knupfer appealed to anyone with information on the three remaining “Disappeared” cases to contact the commission by phone on 00800 555 85500, by letter via PO Box 10827, Dublin 2 or via iclvr.ie.