Alarming consequences for climate change in Ireland without Brexit deal 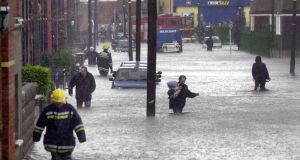 There will be alarming consequences for Ireland on energy and climate change, if the UK “crashes” out of the EU, according to Nick Mabey, the head of E3G, a leading European environment think tank.

Speaking in advance of meeting Government officials and addressing the Institute of International & European Affairs in Dublin on Friday, he said a transition arrangement for Britain would be most favourable for all sides, but he feared current political upheaval following the UK election may mean an orderly Brexit cannot be negotiated at this point.

An economic transition outcome would be favourable for the UK, retaining access to Europe’s Internal Energy Market, reducing energy costs and avoiding the Republic becoming “an energy island” – with all the additional costs and lack of security on energy supply that would go with it, Mr Mabey said.

“This [transition] scenario would also avoid a cliff-edge for business and investors and provide a strong basis for continued cooperation on climate and environment issues,” he told The Irish Times. As of this week, Brexit was predominantly about “lose-lose economics” but there were potential “win-win areas” of co-operation, notably on defence; energy, climate change and research and development.

He said Ireland could play a critical role in creatively fostering this approach. The EU, in contrast, continued to believe Brexit was a British problem and, with the election of Macron in France and an economic upturn in Europe, he believed there was complacency on that side of the table.

“While election results have enhanced unity and stability on the Continent, the surprise hung parliament in the UK has significantly undermined its authority,” he added.

Instability and weakness of the government, which may lead to a collapse and fresh elections within the two-year Article-50 period, “could result in a crash Brexit” and a rise of hostile nationalism. Having spoken to major business interests in Britain and the EU in recent days there was a concern such a chaotic political scenario meant an extreme Brexit, where the UK would pursue deregulation to compete.

“If Ireland does not make the case for more balanced negotiation, who will?” he asked. The co-operative approach would be good for Ireland and Europe. Integration of the European electricity market was facilitating much greater use of cheaper renewable energy sources and increased cross-border trade. In the absence of the UK, Ireland could become an “energy island” and face increased economic disruption.

In countering climate change, he said Ireland needed to make big investment decisions, which required “clarity on its energy relationship with the UK” as Ireland depends on Britain to maintain electricity and gas supplies. He said he would be urging the Government to work through the consequences of Britain bailing out on its climate change obligations. The budgetary implications and likelihood of increasingly demanding targets to reduce greenhouse gas emissions was an immediate issue to be addressed.

The timing could not be worse, he said, as this would chill progress on climate change across Europe, just as the EU was standing up to US president Donald Trump in pushing on with addressing the issue. It would amount to stalling on climate change at a time when actions have to accelerate.

The current approach on negotiations had to go beyond preoccupation with borders, he suggested, while energy and climate change issues warranted being brought forward in the process. The reality was that tariffs were small beer, Mr Mabey said, in comparison to energy and the advantages from a single market.

A fragmented energy market would increase the costs of decarbonisation for both sides, create significant uncertainty for business and investors, and undermine co-operation while “major energy exporters such as Russia would be significantly empowered in this scenario”.

“Given a choice between transition or crash there is an urgent need to promote a cooperative track for energy and climate issues,” he said, “If this could gain widespread support across civil society, business and academic groups it could be a powerful force in driving towards an economic transition scenario.”

Mr Mabey is due to meet officials from the Department of the Taoiseach and the Department of Foreign Affairs. He is also addressing a meeting of the European interparliamentary network on renewable energy and energy efficiency EUFORES at Leinster House.