Analysis: If businessman runs for Dáil he could stop Sinn Féin winning a second seat in Donegal

Arriving at the Dublin count at the Convention Centre, Independent candidate Peter Casey says he will run for president again - unless he is Taoiseach at the time of the next presidential election. 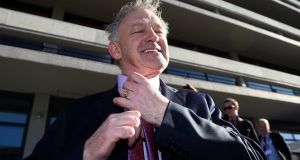 Presidential candidate Peter Casey arriving at Dublin Castle on Saturday where the final results will be announced. Photograph: Clodagh Kilcoyne/Reuters 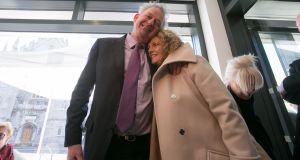 Peter Casey and his wife Helen at Dublin Castle, where the election result will be announced. Photograph: Gareth Chaney/Collins 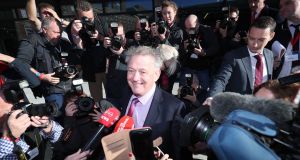 If the stronger than expected vote for Peter Casey is a kick against the establishment, the political establishment seems pretty relaxed about it.

To claims of a Casey surge leading to wider change in Irish politics, those in Fianna Fáil and Fine Gael raise an eyebrow and ask what became of Declan Ganley and Seán Gallagher.

Casey winning 23.3 per cent of the total valid poll is being seen as a protest vote in a contest where many who supported him did so in the knowledge that Michael D Higgins was the certain victor, not as a way of unleashing an Irish Trump.

“It was a consequence of a free vote, he was never going to win,” said one Fine Gael Minister.

Exit polls showed that Casey – who lit a fuse under his campaign by criticising Travellers – performed strongly among older, rural voters and was popular among Fianna Fáil supporters. Fine Gael TDs acknowledge that some of their rural supporters voted for Casey too, but neither party is panicked about it.

If anything, the only long-term political fallout from Casey’s performance being seriously discussed is that he could run for the Dáil in Donegal and stop Sinn Féin winning a second seat in the constituency.

While Casey has said he intends joining Fianna Fáil with a view to revitalising the party and one day becoming Taoiseach the party leader Micheál Martin had poured cold water on the idea.

The prospect meanwhile of Casey heading up a new political movement or party is not seriously entertained. Most TDs were amused at what they saw as levels of doomsday alarm on social media about the rise of a new Irish right.

“I see all this shite on social media about how over 20 per cent of Irish people are now racists,” said one Minister. “They’re not racists, they’re just moans.”

A Fianna Fáil TD added: “People need to let the dust settle and not say anything stupid over the next two days. I saw this stuff on Twitter like: ‘Peter Casey has done in Ireland what it took Sweden seven years to do’.”

Another Fianna Faíler said Casey attracted a “cross-section” of support but one that would likely return to the parties at a general election.

Casey’s vote is being explained by a number of factors by mainstream parties. Turnout was very low, the campaign itself was poor, the candidates were of low quality and a significant number of voters embraced the opportunity to support a wildcard knowing there would be no serious consequence.

“It’s anti-establishment and Irish people don’t like being told what to think,” said one Fianna Fáil source. “It was also the worst campaign in living memory.”

However, it was also said by TDs that Casey tapped into a sense of disenchantment in rural Ireland about poor levels of economic opportunity and support from the State. The parties needed to be alive to that, if they aren’t already.

Fianna Fáil, in particular, makes that argument nationally but party figures caution against reading too much into Casey’s success.

Fine Gaelers and Fianna Fáilers also said a strong runner up to Higgins was always likely to emerge from the pack, as Gallagher did in 2011, and pick up support from those who did not want to vote for the incumbent.

Casey’s incendiary move to attack Travellers elevated him into that second place position.

But TDs report that many of their constituents told them he was just saying what mainstream politicians would not, and a significant number say the issue cannot be waved away as readily as the notion of Casey as a lasting political figure of stature.

A number of deputies said that a mature debate needs to be had about the Traveller community, particularly in areas of the country where there are tensions with the settled community.

One Fine Gael Minister said he resented the fact that the inability of the body politic and the media to deal with the issue in a serious fashion had opened the door to someone such as Casey.

“There are hard messages,” the Minister said. “What is going on in some places is unacceptable but we haven’t spoken about it.

“I am pissed off that we allowed the door open to a Trump-style figure. Don’t forget he also called Michael D a liar, and he said Leo was an Indian.”

During the campaign itself, Pádraig Mac Lochlainn, a Sinn Féin Senator from a Traveller background said Casey may have “done us a service” by bringing out into the open a debate that needed to take place.

Mac Lochlainn said “not everyone who has had a bad experience with the Travelling community is a racist”, and that there needed to be better relations and understanding between Travellers and the settled community.

The medium- or long-term effect from Casey’s showing in this election could be to bring forward that debate, rather than any significant effect on politics at large.