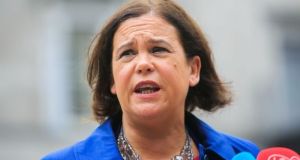 Taoiseach Micheál Martin has acknowledged that co-living accommodation has the potential to become “glorified tenement living”.

Mr Martin said in the Dáil that co-living had not taken off as originally feared.

“There have been a lot of planning applications passed, but as a percentage of overall development, it is very low.

“In my view, of course it has the potential to become glorified tenement living given the nature of some of the applications I have seen and what could transpire.”

He said Minister for Housing Darragh O’Brien was conducting a review and he had “no difficulty in waiting to see the review and for it to be published”.

Mr Martin was responding to Sinn Féin leader Mary Lou McDonald ahead of the debate on her party’s Bill to ban co-living schemes.

These are developments that include small en-suite bedroom alongside large communal spaces including kitchen facilities which residents share.

Ms McDonald reminded the Taoiseach that even though he was conducting a review, in opposition Mr O’Brien described co-living as “bonkers”.

She pointed to a co-living application in the markets area near Capel Street in Dublin city centre in her constituency for a 14-storey, 506-bed co-living development.

She told the Taoiseach that he previously referred to co-living as “battery cage-type accommodation”. She said it was particularly dangerous in the middle of a pandemic and called on the Government to back the Bill.

But, later on Tuesday night, Minister of State Peter Burke said the Government would not accept the Ministerial Power (Repeal) (Ban Co-Living and Build to Rent) Bill.

“Compare that to the paltry number of live planning applications and permissions for affordable housing under the Government’s serviced sites fund.”

He said there was little or no investment in affordable homes but “outstretched arms to equity investors queueing up to build co-living”.

He said co-living was a “bad form of accommodation” and a “greed-driven model that seeks to pack as many people as possible into as small a space as possible to maximise profits”.

These were “gentrified tenements” with asking rents at an estimated €1,300 a month for a single person.

He said former minister for housing Eoghan Murphy in 2018 introduced controversial planning regulations that allowed co-living developments that provide just 12 square metres of personal living space for a single person, which he said “is the size of an average car parking space”.

Mr Ó Broin criticised the current Minister’s failure to attend the Dáil for the debate, and said it was becoming a habit for Mr O’Brien either not to attend or to leave early in a debate.

The Minister of State claimed Sinn Féin “has not made any attempt to ensure the Bill is legally sound” and said it was doubtful the party had done any research on the potential long-term impacts of the Bill.

Mr Burke said the Bill would “remove a provision introduced to empower the Minister to ensure a nationally consistent approach to planning”.

He said it would result in a return to the 2015 situation where there were four different apartment standards in each of the four Dublin local authorities.

Mr Burke added that the provision enabled the Minister to ensure where necessary there could be national policies and standards for planning and development.