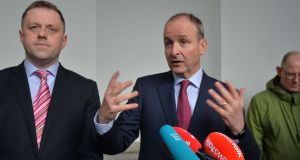 The two held preliminary discussions on Tuesday afternoon. Mr Martin said he would “reflect” on the conversation and another meeting will be arranged.

“I did put to him that we were willing to engage and that we were of the view that both parties should commence discussions even on an exploratory basis in terms of policy, in terms of a program for government.”

He said the Taoiseach did not reject that.

In a statement after the meeting, Mr Varadkar said the two leaders agreed to meet again but “Fine Gael continues to prepare for opposition”.

Mr Varadkar “encouraged Fianna Fáil to continue engaging with other parties with a view to forming a government”.

The two leaders “exchanged views on a number of matters including; housing, climate change, health, cost of living, the economy and taxation”, according to the Taoiseach.

Mr Martin said there had not been any substantial progress in the efforts of Sinn Féin or other parties to form a left-wing alliance.

He added it was a “very unlikely scenario” for Sinn Féin to emerge with “any credible numbers to form a government”.

Fianna Fáil will begin a series of policy based discussions with the Green Party on Wednesday. Mr Martin said he wanted to see the Greens involved in government.

“We need that policy dynamic in a government to ensure there is real delivery” on issues such as climate change.

Mr Martin said the Irish public “expect us to get stuck in”.

He said that while no one had ruled out a reverse confidence-and-supply arrangement between Fianna Fáil and Fine Gael there was a valid point to be made about the arithmetic potentially not stacking up.

Sinn Féin leader Mary Lou McDonald has criticised Mr Martin’s decision not to talk to her party about government formation, saying: “I hope the leader of Fianna Fáil changes his position but he may not.”

Ms McDonald said that, in contrast to his decision not to talk to Sinn Féin, Mr Martin’s “eagerness to run into the arms of Fine Gael is lost on no one”.

Meanwhile, Fianna Fáil TD Éamon Ó Cuív said he believed Sinn Féin was no longer under the influence of the IRA.

In an interview on RTÉ Raidió na Gaeltachta, Mr Ó Cuív said he had read the report referenced by Garda Commissioner Drew Harris and what it had stated was that some people were of the opinion that the IRA army council had oversight of Sinn Féin.

“What that report says, basically, is that the IRA doesn’t exist, because there is no group that’s training, or buying arms, or involved in paramilitary activity... What the PSNI said is that other groups had told them that there was oversight, or that they were of the opinion there was oversight... It’s based on hearsay.”

Mr Ó Cuív denied that he was at odds with the stance of his party leader Mícheál Martin on this matter.

“We asked people to abandon violence and to go with politics, and we told them they’d then be accepted, and I think when people abandon violence, we shouldn’t then accuse them of still being party to it.”

Mr Martin also held talks on Tuesday with the regional independent group which is a new group of nine TDs.

He said they impressed upon him the need to speed up the tempo of government formation talks and also spoke of the importance of creating a stable coalition.

“Their view is strongly that a government that will be formed needs underpinning in terms of going the distance.”

“While the group operates as a technical group in Dáil Éireann, the members felt it was imperative they express the views of their constituents that there is now an urgent need to form a stable and effective government to address the issues facing the country,” said the group’s convenor Denis Naughten.

“The group had a useful exchange of views and await developments by all the political parties.”