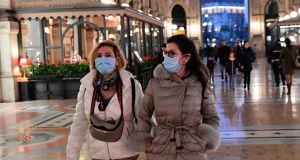 The European Union is not advising countries to close their borders but said it was monitoring the spread of the coronavirus “around the clock”, as it pledged €232 million to curb a global outbreak on Monday.

Parts of northern Italy were under lockdown to combat a steep rise in Covid-19 infections in the worst outbreak outside Asia, as escalating cases in South Korea and Iran triggered concern from the World Health Organisation.

The virus has killed more than 2,600 people across 29 countries, disrupting travel, sending stock markets plummeting, and raising fears of economic recession as the fallout blocks global supply chains for everything from cars and car parts to smartphones.

“Viruses know no borders,” said Stella Kyriakides, European commissioner for health and food safety. “We can only address and contain this outbreak and avoid further global spread if we all address it at global level and work closely together.”

The European Commission said it was not recommending EU countries close their borders, as the spread of the virus put the 26-country Schengen area of check-free travel under strain.

Authorities in Austria temporarily suspended train travel from Italy, and bus passengers who arrived from Milan to the French city of Lyon were held for health checks, as confirmed cases in Italy rose above 200 on Monday and a seventh person died from the virus.

The aid package of €232 million is divided between €114 million to the World Health Organisation, a planned €15 million for efforts to combat the virus in Africa, €100 million for research including to find a vaccine, and €3 million for the repatriation of EU citizens from the epicentre of the virus in Wuhan, China.

The situation in Italy . . . shows how important it is that member states are prepared and stand ready

The ability of the EU to co-ordinate a response is limited, as member states retain control over the key areas in question including health policy and national borders. Nations in the Schengen area – which excludes Ireland – began to abolish border controls in the 1990s, but can re-establish them if there is a threat to public safety or public policy. The commission called on member states to step up preparations and react proportionately and according to scientific evidence.

“We have been following the developing situation in Italy very closely . . . and these rapid developments over the weekend have shown how quickly the situation can change,” said Ms Kyriakides.

“The situation in Italy . . . shows how important it is that member states are prepared and stand ready in case they are also faced with a similar situation.”

The virus has led to the cancellation of a number of major events around the world. Venice called off its famous Carnival festival, and the outbreak also threatens to affect upcoming EU events, with a planned EU-China summit in Beijing under question.

“We are actually having some informal discussions on the summit preparations in terms of how coronavirus will influence the preparations,” an EU diplomat said. “We are monitoring the situation very closely and there are some decisions to be made as well.”

The summits between China and its largest trading partner the EU are held annually in spring, and the 22nd had been expected to take place in Beijing at the end of March. This year is seen as crucial for EU-China relations, with profound questions over security and technology on the table, such as whether to allow telecoms giant Huawei to provide key 5G wireless infrastructure.