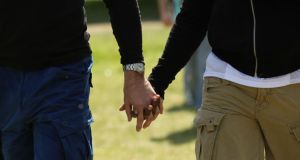 Two applications for leave to bring petitions challenging the result of the Same-sex Marriage Referendum will come before the High Court on Friday. File photograph: Yui Mok/PA Wire

Two separate applications for leave to bring petitions challenging the result of the referendum clearing the way for same-sex marriage here will come before the High Court on Friday.

Both matters are due to come before the president of the High Court, Mr Justice Nicholas Kearns, and both applicants, should they get leave to bring their petitions, are seeking injunctions preventing the issuing of a certificate verifying the referendum result pending the outcome of their proceedings.

One challenge has been initiated by Gerry Walshe, an electrician, from Lisdeen Road, Co Clare, while the second is brought by Maurice J Lyons, a gardener, with an address at Callan, Co Kilkenny.

‘Not fair or impartial’

It is understood the grounds of Mr Walshe’s challenge, brought against Ireland and the Attorney General, the referendum returning officer and the Referendum Commission, include a claim that the referendum process was not fair or impartial in relation to monies spent.

It is also believed he will argue the proposed amendment conflicts with the centrality of the Christian ethos of the Constitution.

The Government recently announced it will fast-track legislation to allow for same-sex marriage by early autumn.

Minister for Justice Frances Fitzgerald said she intends to have the Marriage Bill 2015, on which work had begun prior to the referendum, enacted by the end of July.

Under the Referendum Act 1994, a petition challenging a referendum result may only be brought with leave of the High Court.

In its judgment earlier this year dismissing a challenge by Dublin woman Joanna Jordan to the 2012 Children’s Referendum, the Supreme Court clarified the test which must be met for a challenge to a referendum or election result to succeed.

In dealing with Ms Jordan’s claim that the test set out in the 1994 Referendum Act requiring that a person challenging a referendum result must prove that unconstitutional conduct “materially affected” the outcome, the court set a new test for considering whether there was material effect.

That test stipulates that “material affect” on the outcome of a referendum involves establishing whether it is “reasonably possible that the irregularity or interference identified affected the result”.

The object of the test was to identify the point at which it can be said that “a reasonable person could be in no doubt about, and no longer trust, the provisional outcome of the election or referendum”.