‘There is no call for that type of stuff,’ says local TD Michael Fitzmaurice 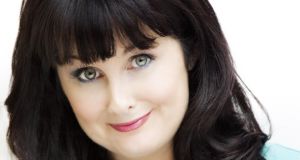 Marian Keyes: she quickly and repeatedly apologised to outraged Twitter followers, including MEP Luke Ming Flanagan from Roscommon, who described her remark as “ignorant and thoughtless”. Photograph: Barry McCall

Writer Marian Keyes has apologised for a comment she made on Twitter about Roscommon-South Leitrim in the wake of the marriage referendum results on Saturday. The constituency was the only one in Ireland to reject the referendum to introduce marriage for same-sex couples, voting 17,615 in favour of the proposal, 18,644 against.

Keyes posted a comment on Twitter, referring to residents as bigots, before rapidly deleting it. “Tip?! I’ll give you a tip! Move to Roscommon/South Leitrim and pal around with your own kind. #OfHateFilledBigots,” the tweet said.

The author quickly and repeatedly apologised to outraged followers, including MEP Luke Ming Flanagan, from Roscommon and described her remark as “ignorant and thoughtless”.

Local Independent TD Michael Fitzmaurice, who replaced Mr Flanagan when he went to Europe, told The Irish Times Keyes should be ashamed of what she said. “There is no call for that type of stuff,” he said. “The people of Roscommon-South Leitrim are as good a people as any part in Ireland.”

Asked why he thought the vote went the way it did, he said a lot of youth had gone from the area. He also pointed out that more than 17,000 people had voted in favour of the proposal and said the media might have turned some of the votes because in the last week or two, “if you opened your mouth too much against”, you were put in your place and people didn’t like that.

He cautioned against a postmortem on the constituency’s decision. “There shouldn’t be a big inquiry into what people do; you respect that and that’s democracy in my view,” Mr Fitzmaurice said.

Separately yesterday, Kieran Rose, chairman of the Gay and Lesbian Equality Network, said that although he knew they were disappointed, Yes campaigners in Roscommon should be congratulated for a “fantastic campaign”.

“They should be proud of the campaign they carried on in a very difficult circumstance, in a not very easy place to win that huge number of votes,” he said.