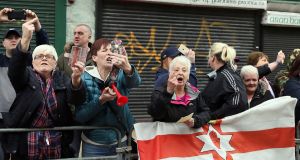 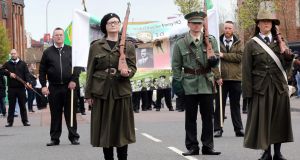 Republicans in period costume march along the Falls road in Belfast on April 24th, 2016, as they commemorate the centenary of the 1916 Easter Rising. Photograph: Paul Faith/AFP/Getty Images 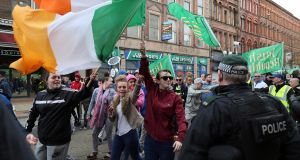 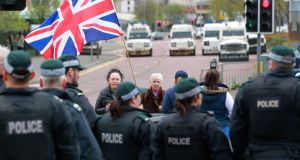 The violence-free outcome on Sunday of republican parades in Belfast to mark the 1916 Rising, and loyalist counter-protests afterwards, is to be praised, the PSNI said.

Following the conclusion of parades and associated protests on Sunday, PSNI Supt Darrin Jones said the aim of the day’s police operation, which was intensive, was to ensure the safety of everyone involved.

“We had an appropriate and proportionate operation in place and I am very pleased with how the day has passed.

“The efforts made by community representatives and event organisers showed a real willingness to ensure all events passed off peacefully,” he said.

Loyalist demonstrators earlier staged a protest during a hardline republican parade through Belfast marking the centenary of the 1916 Easter Rising.

There was a major security operation in the city centre for the parade, organised by the North Belfast 1916 Easter Rising Centenary Committee on Sunday - the calendar anniversary of the historic event.

One band and more than 1,000 people took part in the march, from Hallidays Road through Royal Avenue in the city centre and on to Divis Street in west Belfast to meet a larger “Peoples’ Parade”, and on to Milltown Cemetery for a remembrance service.

PSNI vehicles lined Royal Avenue on Sunday morning with a number of side streets blocked off by steel barriers.

The Loyal Peoples Protest and Protestation Coalition demonstration, involving about 100 people, was staged during the parade in Royal Avenue, near the location where two UDR men were killed by the IRA in 1988.

There was jeering and aggressive verbal exchanges between loyalists and republicans, but no violence.