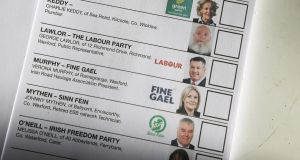 Detail of a ballot paper for the Wexford constituency in today’s byelection. Photograph: Nick Bradshaw

Counting of votes begins at the four count centres in Dublin Mid-West, Fingal, Wexford and Cork North Central at 9am today.

Turnout in all four byelections was reported as very low throughout yesterday, reflecting campaigns that for the most part failed to excite voters’ imaginations. Reports from all four constituencies during the day suggested that turnout could struggle to exceed 30 per cent, less than half what would be expected in a general election.

Reports suggested that turnout in Cork might reach the mid-30s, and while in Wexford some areas were also registering a turnout into the 30s. Turnout was even lower in parts of the two Dublin constituencies voting today, with some observers expected a record low.

Fianna Fáil is hopeful of winning two of the contests, in Cork and Wexford, while Fine Gael is hoping to avoid a whitewash in all four contests, with the party pinning most of its hopes on winning a seat in Dublin Mid-West.

Both the Green Party and Labour have targeted Fingal as a possible gain, while Independent councillor Paul Gogarty has been tipped in Dublin Mid-West.

Sinn Féin is hoping for a strong vote in Cork North-Central and in Wexford, where its candidate Johnny Mythen narrowly missed out on a seat at the last general election – but, like other Sinn Féin candidates, saw his vote collapse at the local elections in May. The party hopes this election could mark the start of a revival.

Many observers will be closely watching the vote of the Fine Gael candidate in Wexford, Verona Murphy, whose adverse comments about immigrants caused controversy.

However, all parties admit that the combination of a low turnout and lack of voter engagement mean that the outcomes today are highly unpredictable.