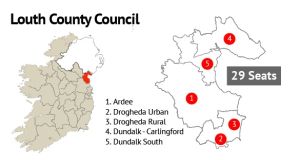 However it was Fianna Fáil that was the biggest winner in the local elections in the county.

Fianna Fáil secured five seats in 2014, but the party has now increased this to seven in 2019.

This includes three seats out of six in Dundalk Carlingford which were taken by Erin McGreehan, Sean Kelly and Conor Keelan.

Fianna Fáil in Dundalk-Carlingford picked up a seat previously held by the Green Party, which contrary to the trend elsewhere across the country lost out.

For Sinn Féin the local election results were a disappointment with the party losing three seats in Louth, including in Drogheda and Dundalk.

Former Sinn Féin leader and local TD Gerry Adams said there had been some local factors and vote management issues at play.

He said the party found it hard to consolidate the gains it had made in the last local elections.

He said the party would learn the lessons from the results of the 2019 local elections.

Fine Gael in 2014 won seven seats in the local elections although one of its councillors subsequently left the party to run as an independent.

He now has three days to choose which of these areas to represent and can suggest a person to hold the seat in the other electoral area. However the full council will make the final decision.

Overall, Fine Gael lost one seat in Louth in the local elections.

Senator Nash said the Labour’s party had achieved its best ever successes in local authority elections in the county.

Labour secured two seats in Drogheda Urban with both Paul Bell and Pio Smith polling strongly and being elected on the first and second counts respectively.

Labour was delighted with the performance of Michelle Hall who only joined the party last year and took a seat in Drogheda Rural.