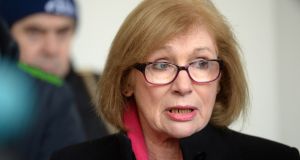 Jan O’Sullivan of Labour: “I am feeling very emotional today, because I was there in 1983, and the atmosphere was so incredibly different then.” File photograph: Dara Mac Dónaill/The Irish Times

Two out of three people in Limerick city have voted in favour of repealing the Eighth Amendment.

The highest percentage of Yes votes were recorded in large suburban areas, including Castletroy, Corbally and Dooradoyle.

The overall figure for Limerick City showed 66.8 per cent supporting repeal and 33.13 per cent against.

The highest percentage of Yes votes (77 per cent) were recorded at two boxes in polling stations in Shannon Banks in Corbally and the Gael Scoil in Castletroy (Gael Scoil Chaladh Treo).

The result is comprehensive, the people have spoken and it is now very important the legislation is moved on quickly

Polling stations in Monaleen, Milford, JFK school and Caherdavin girls’ school also recorded high percentages of Yes votes. A total of 34 boxes in Limerick city had over 70 per cent of Yes votes, according to an official tally carried out by the Limerick Together for Yes Campaign.

Speaking about the result, Deirdre Flynn, canvass lead with Limerick Together for Yes, said the result represents a new and more compassionate Ireland.

Ms Flynn said Limerick Together for Yes was one of the biggest civic society campaigns ever run in Limerick. The group, which consisted of 400 volunteers, canvassed 25,000 houses in the region in recent weeks, distributing over 40,000 leaflets.

“The result is comprehensive, the people have spoken and it is now very important the legislation is moved on quickly,” said Ms Flynn.

“It’s about change, people want this from every part of society, there is a new Ireland emerging. What was going on and what happened before is over, and we are opening the door onto a much more compassionate and happy place.”

Labour TD Jan O’Sullivan said the Oireachtas will not be reflecting democracy if the overwhelming view of the Irish people is not respected.

“ I am feeling very emotional today, because I was there in 1983, and the atmosphere was so incredibly different then; Ireland was the kind of place where if you were against the amendment – in other words putting article 43.3 into the Constitution – you were somehow considered to be almost a pariah, you were going totally against the spirit of Ireland, whereas now you are totally different,” she said.

A total of 62 per cent of people in Limerick city voted in the referendum – just 1 per cent less than the number that voted in the 2015 Marriage Equality Referendum.